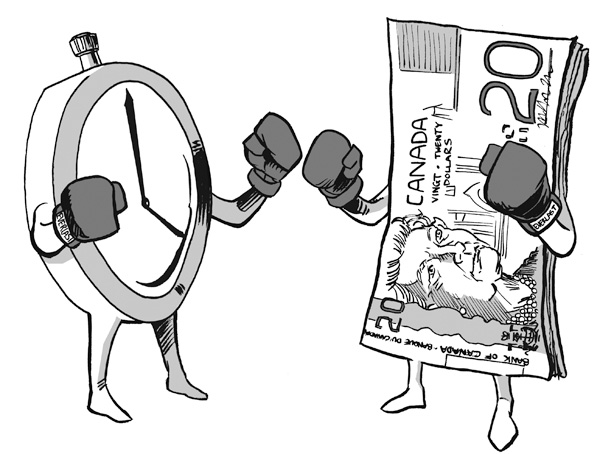 Recently LinkedIn hosted a forum where “influencers” were asked what advice they would give their 22 year-old self. One that caught my attention was Arianna Huffington, of Huffington Post fame:

If I could go back in time, I’d introduce my 22-year-old self to a quotation by the writer Brian Andreas:

‘Everything changed the day she figured out there was exactly enough time for the important things in her life.’

If only I had learned this lesson sooner! But I hope that by sharing it here, I can make a difference in someone else’s life, and save them from the perpetually harried, stressed-out existence I experienced for so long.

Our culture is obsessed with time. It is our personal deficit crisis. We always think we’re saving time, and yet we feel like we never have enough of it. In order to manage time — or what we delude ourselves into thinking of as managing time — we rigidly schedule ourselves, rushing from meeting to meeting, event to event, constantly trying to save a bit of time here, a bit there. We download apps for productivity and eagerly click on articles with time-saving life hacks. We try to shave a few seconds off our daily routine, in hopes that we can create enough space to schedule yet another meeting or appointment that will help us climb the ladder of success. Like airlines, we routinely overbook ourselves, fearful of any unused capacity, confident that we can fit everything in. We fear that if we don’t cram as much as possible into our day, we might miss out on something fabulous, important, special, or career advancing. But there are no rollover minutes in life. We don’t get to keep all that time we “save.” It’s actually a very costly way to live.

We suffer from an epidemic of what James Gleick’s book “Faster: The Acceleration of Just About Everything” calls “hurry sickness”:

‘Our computers, our movies, our sex lives, our prayers — they all run faster now than ever before. And the more we fill our lives with time-saving devices and time-saving strategies, the more rushed we feel.’

Harvard professor Leslie Perlow has given this feeling a name: “time famine.” Feeling like you’re experiencing time famine has very real consequences, from increased stress to diminished satisfaction with your life. On the flip side, the feeling of having enough time, or even surplus time, is called “time affluence.” And though it may be hard to believe, it’s actually possible to achieve.

Some people are naturally time affluent. My mother, for instance. In fact, when it came to time, she was filthy rich. She moved through her days like a child does, living in the present, stopping, literally, to smell the roses. A trip through the farmers’ market might be an all-day affair with little thought of All the Things That Must Be Done. I still often think of the advice she’d give my sister and me when we were faced with a hard decision: “Darling, let it marinate.” In other words, give yourself the time to think about and live with the consequences of the decision.

My mother was a towering example of the joys of slowing down. Until her death in 2000, she and I had an unspoken deal: Hers would be the rhythm of a timeless world, a child’s rhythm; mine was the rhythm of the modern world. While I had the sense every time I looked at my watch that it was later than I thought, she lived in a world where there were no impersonal encounters, and never a need to rush. She believed that rushing through life was a sure way to miss the gifts that come only when you give 100 percent of yourself to a task, a conversation, a dinner, a relationship, a moment. Which is why she despised multitasking.

… I wish I’d known this when I was 22 – and I hope it’s what young people just starting out will take away from this. According to a 2008 Pew report, when asked what was important to them, 68 percent of Americans replied “having free time.” It ranked even higher than having children, which came in at 62 percent, and a successful career, at 59 percent. Yet the way many of us choose to live doesn’t reflect those priorities. As long as success is defined by who works the longest hours, who goes the longest without a vacation, who sleeps the least, who responds to an email at midnight or five in the morning — in essence, who is suffering from the biggest time famine — we’re never going to be able to enjoy the benefits of time affluence.

It is a remarkable observation, and it reminds me that I have been blessed to live with my wife who is childlike in her timelessness – whose Sabbath-like days are windows into what Rabbi Abraham Joshua Heschel called the holy moment of the eternal God.

No wonder Jesus exhorted his followers to become childlike! He doubtless knew that part of that ‘becoming’ would lead to the recovery of the art of losing oneself in wonder, love, and praise… This childlike art of absorption, which most adults have sacrificed in the ‘muchness and manyness’ of life, Jesus seemed able to retrain even in maturity.

May you be blessed with time affluence, and bask in the sabbath rest of the One who made you for Himself.

1 thought on “#IfIWere22 (Time and Timelessness)”