A pile of Garbage along the side of the highway, Contentment, Ernie Jesso, Good Samaritan, Mike and Caroline Trueman, More Enigma, Parable of the Good Samaritan, Relationship Serendipity and Transformation, Stopped complaining, That's not garbage that's a person, The enigma of our worth, The Mystery of our Worth 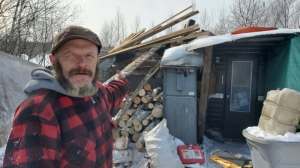 Mike and Caroline Trueman were driving back to their home in Sussex from Fredericton on Feb. 6 when they saw what they thought was a pile of garbage alongside the highway in Jemseg, about 50 kilometres east of the capital.

As they got closer to it they noticed a guitar case laying on the ground, and realized:

That’s not garbage, that’s a person.

They turned back and found 50-year-old Ernie Jesso wrapped in a blanket and leaning against a guardrail. He had been walking from Oromocto back to his makeshift home in the woods off Route 10 near Long Creek, a journey of nearly 85 km.

After they picked him up, warmed him up, and fed him up, they drove him to his hut. (To read more go to Shane Fowler’s “N.B. couple who gave lift to veteran shivering on highway say it changed their life“).

the story of relationship, serendipity, and transformation.

Fowler reported the Truemans said the simple act of helping someone in need changed how they look at their own lives.

What I really stopped doing was complaining about, you know, wanting a bigger house, better truck, more money,” Mike said.

“This guy had nothing, and he was happy. And I said to my wife, ‘I got more out of [this encounter] than he did.’

To read the whole story, see Shane Fowler’s “N.B. couple who gave lift to veteran shivering on highway say it changed their life.“

To Whom am I a Neighbour?

You can’t help but be reminded of the Parable of the Good Samaritan. Jesus gives this story in answer to the question “who is my neighbour”, only to find that the real question is “To Whom am I a Neighbour?”

Without fanfare or pride, Mike and Caroline Trueman demonstrate the answer. It is remarkable that they could’ve just driven by:

What they thought was a pile of garbage alongside the highway.

But like the Samaritan in Jesus’ parable, they stopped, helped in whatever way they could, and in the end confess they got more out of the encounter than what they gave a one-time stranger. They could have so easily missed it. They could’ve thought their travel plans were too urgent, or could’ve pretended that the person on the side of the road was a pile of garbage.

Perhaps this is part of the bigger problem in our society – the problem of thinking of people as piles of garbage. And the shock of transformation comes when they realized they received so much more than what they gave. They found relationship; they discovered contentment; they changed.

And it all started with the realization:

That’s not garbage, that’s a person.

Over the course of writing “More Enigma” I have been mindful to speak to “the enigma of our worth to the One who made us for Himself”. God has revealed this at many times in various ways such as in Psalm 8:

When I consider your heavens, the work of your fingers, the moon and the stars, which you have set in place,

What is mankind that you are mindful of them, human beings that you care for them?

The Psalmist considers creation that engenders awe – the heavens, the moon and the stars – in order to consider something else that arouses awe: God is “mindful” and “caring” of mankind.

Who are we to God that He is thinks of us at all?  Or as Eugene Peterson puts it in the Message:

Why do you bother with us? Why take a second look our way?

Embedded in this Psalm is the seed for exploring the mystery of our worth – for our worth isn’t so much about us, as it is about the God who ascribes worth to us.  The mystery is that we have worth to God and we can plunge ourselves into His inexhaustible value.

Thus, I am on a journey to uncover, disclose, and otherwise, expose the glory of God in Christ’s amazing way of investing value in each of us as we enter into relationship with Him.

4 thoughts on “A Pile of Garbage alongside the Highway?”