"I didn't know him at all.", Chatelaine, Forgiveness, Marriage, Scarred, Sewn Together, To be fully known, Torn Apart 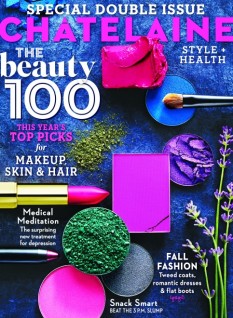 My wife had a copy of the September, 2014 issue of Chatelaine magazine in the bathroom – the place in the house most suitable for on the run reading (no pun intended). I leafed through it to find something more to my interests than recipes, fashions, and advice from various experts.

In fact, from the cover of September’s issue, I would not intuitively expect to find the heart wrenching article, Torn Apart.  Written by Lauren Wise (not her real name), she divulges what happens to her and her marriage when her husband reveals he was having an affair with a waitress (not that the mistress’ “career” adds anything meaningful to the betrayal).  The timing of her husband’s confession comes only after his waitress friend and he split up; and now he considers his option to try to give his marriage a “second shot.”

The author of the article has an epiphany:

I realized right there in my kitchen, that I no longer loved the man with whom I had vowed to spend the rest of my life. My feelings just died. He said he was sorry, that he had had an affair because he was unhappy and confused, that he didn’t want to hurt my feelings and that he didn’t know how to communicate. He had felt overwhelmed by the responsibilities that came with kids and had realized he was more selfish than he’d imagined. He said that he and his girlfriend had split and that he wanted to give our marriage a second shot. I wanted to feel sorry for him, to put myself in his shoes, but I just felt dirty. People are supposed to be born with a conscience. There is right and wrong; there is no in-between. I never would have had the nerve to lead a double life, to constantly lie to the person who loved me most. It was cowardly. Vulgar. Unforgivable. I didn’t know him at all.

I suspect Chatelaine readers rose up cheering in camaraderie, and why not – this guy broke a sacred trust of loyal love. But this isn’t exactly a happy story. The author puts her spin on the byline, “When I found out my marriage was over, I thought my life was over too. Turns out it was the best thing that ever happened to me.” It is a betrayal looking for redemption akin to Joseph confessing to the brothers who sold him into slavery, “You meant it for evil, but God meant if for good.” (Genesis 50:20)

So…its all good then? It is grace that we can snatch the threads of life from the rags of injury, but we would not want for injury. Who can blame the wife who’s “feelings just died?” Who has patience for a man who was unhappy and confused, overwhelmed by responsibilities and had his own epiphany of selfishness? Who knows if his “I’ll give my wife a second shot” came from having lost his first shot with the mistress, or if it came from an honest place of a heart truly broken with regret.

We will never know. Her moment of decision was lightning quick based on her feeling dirty; on her understanding that people are supposed to be born with a conscience; on her ethic that there is right and wrong and no in-betweens; on her own perception that she could never lead a double life, or constantly lie to the person she loved the most; and on her assessment that “it was cowardly. Vulgar. Unforgivable, and she didn’t know him at all.”

The truest line was the last line, “I didn’t know him at all.” It is hard to admit to ourselves the ways we live with a person, and not penetrate the capsule of intimacy. We are made to know and to be known…deeply.  The Biblical word used for intimacy is the Hebrew “yada” – “to know” – giving insight to something important to our design. The Apostle Paul alludes to this (I Corinthians 13:12):

For now we see only a reflection as in a mirror; then we shall see face to face. Now I know in part; then I shall know fully, even as I am fully known.

What if the Chatelaine story had gone a different direction: toward the relationship being restored? Wouldn’t this be a redemption story too?  Ron Anderson writes this in his article,”My Wife’s Affair Shattered (and Saved) Our Marriage.”  The cost to “rebuilding the marriage” is no small or simple matter.  When a deep trust has been betrayed, a deeper forgiveness and grace is needed.

Forgiveness is a loaded term, and when the unfaithful husband came back to his wife wanting to try again, who can blame her for being very suspicious of his motives. But what if there had been forgiveness? What if the relationship could be restored?

Like anything of value that is torn apart, the mend doesn’t make it look better, the stitch is simply the unfashionable and unsightly seam of trying to put things back together.  Why would anyone even attempt to sew together that which has been torn?  That is the question couples have to answer when there has been betrayal; is there any value here?

Marriages suffer numerous little betrayals before something is ripped apart, ripped out, or resewn imperfectly. Marriages might be likened to a fabric with numerous stitches.  What might your little repairs and unseemly stitches say about how you feel and think and value your marriage?  You can run your fingers along the seams and remember the tear, how much that hurt, and how much it means to you now to be together?

May you have grace to forgive and give again, to trust while being a little wiser now.

May you know and be fully known.

6 thoughts on “Torn Apart – Sewn Together”