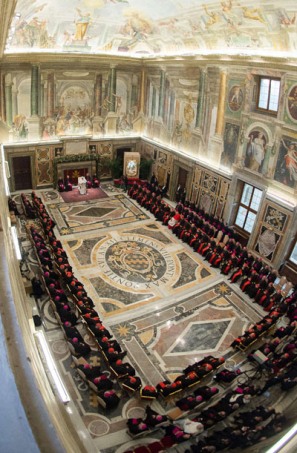 VATICAN CITY — “Pope Francis issued a blistering critique Monday of the Vatican bureaucracy that serves him, denouncing how some people lust for power at all costs, live hypocritical double lives and suffer from “spiritual Alzheimer’s” that has made them forget they’re supposed to be joyful men of God.” (National Post, December 22, 2014)

The list of Pope Francis’ 15 “Ailments of the Curia” delivered in his Christmas address – rates as a modern-day 95 Theses. The difference is – this list is delivered by an insider – not just any insider – the head of the inside!

Talk about your Christmas lists!  But lest anyone thinks they can be off the hook, or darkly celebrate their criticism of the Papal See, this list is an excellent mirror for any would-be spiritual person.

Having ’spiritual Alzheimer’s.’ “We see it in the people who have forgotten their encounter with the Lord … in those who depend completely on their here and now, on their passions, whims and manias, in those who build walls around themselves and become enslaved to the idols that they have built with their own hands.

This is not the holy forgetfulness of forgiveness; this is the ultimate forgetfulness of “the encounter with the Lord.”  This forgetfulness, Pope Francis states, results in people completely depending “on their passions, whims and manias,” as they enslave themselves to the idols “they have built with their own hands.”

Prayer matures into the practice of memory… the most persistent manifestation of sin is to obliterate the memory of sin… memory is not nostalgia.  Memory is not an orientation to the past; it is vigorously present tense, selecting out of the storehouse of the past, retrieving and arranging images and insights, and then hammering them together for use in the present moment… Prayer is an act of memory.

Spiritual Alzheimer’s is a serious diagnosis.

The days we live in can be characterized, in the words of Dietrich Bonhoeffer, as suffering “the agony of prayerlessness.” For the Pope to lay this diagnosis at the feet of his own counsel is courageous and insightful – for there will be no spiritual progress without prayer as an act of memory – especially the memory of encountering Jesus.

Rowan Williams said, “God is the agency that gives us back our memories, because God is the “presence” to which all reality is present.”  It is no wonder that much of the healing that comes from prayer ministry – comes in the form of “remembering” Jesus being present in our lives. We may remember poorly with distortions and embellishments; but in Christ, we come to “the One in whose memory we exist” (as Houston has said).

At the end of the speech, Francis asked the prelates to pray that the ‘wounds of the sins that each one of us carries are healed’ and that the Church and Curia itself are made healthy. 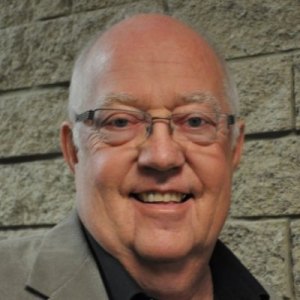 This concern for the spiritual health of leaders is what I have appreciated in the focus of mentor, Laurie Kennedy. He is soon the outgoing Regional Director of Fellowship Prairies, and has consistently spoken passionately to “Healthy Leaders, Leading Healthy Churches into the Harvest.”

In his blog “Leadership Is…” he distills what he has read, learned, and exercised over a long career, as both public servant and Denominational (servant) Leader. My son has jokingly called Laurie, “the Pope of Fellowship Prairies” – a term of endearment that is ironic for any Baptist, especially a servant leader as humble and keen as Laurie.  But the latin word “Pontiff” literally means bridge builder, a characteristic that Laurie has exercised ever since he took on the task of Regional Director years ago.

It’s easy to criticize, but when you engage in prayer, you lose your grip on your gripe, and un-clench your fist of indignation. In prayer you grasp for God and take people along with you for their health.  Thus Paul writes in I Timothy 2:

I urge, first of all, that petitions, prayers, intercession and thanksgiving be made for all people—for kings and all those in authority, that we may live peaceful and quiet lives in all godliness and holiness.

This is countercultural in a world seething with riot or reaction.

Who am I to suggest anything else?  I am a fool who takes Christ’s life and teaching seriously enough to want to follow Him; to enter His prayer world, and to trust His words.  Thus Peterson writes:

Prayer is a reentry into reality… the nonpraying world is a pushing, shoving, demanding world.  Voices within and without harass, insisting that we look at this picture, read this headline, listen to this appeal, feel this guilt, touch this charm… In prayer we intend to leave this world of anxieties and enter a world of wonder.

Did you enjoy the ride?  Or just confused?

“In prayer… we enter a world of wonder.”  This is more enigma than dogma.