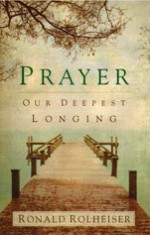 In Ronald Rolheiser’s wise little book, Prayer: Our Deepest Longing, there is a chapter titled, “Growing to Maturity in Prayer,” in which he speaks to some dynamics of aging and maturity as it relates to prayer:

There is a lot of anger in us as we get older.  This is not a case of growing angry as we grow older, but of angry people growing older. Psychology tells us that we get our wounds early on in life, but our angers emerge later… we are more mature now, but we are also full of the angers, disappointments, and resentments of midlife…

As we age and become ever more aware of our wounds, our wasted potential, and the unfairness of life, we come face to face with the final spiritual hurdle – the challenge to become mellow and gracious in spirit. The spiritual task of midlife and old age is that of wrestling with God, of acknowledging all of the ways in which life has disappointed and betrayed us and, in spite of that, understand what God means with the words, ‘My child, everything I have is yours!’

… There’s a lot contained in that remark, ‘I wrestle with God.’ Among other things, it suggests that the struggles in later life can be very different from what we battle earlier on… we spend the last half of our lives struggling with forgiveness and anger. That anger is often, however unconsciously, focused on God.  In the end, our real struggle is with God.

Sometimes there is the tendency to complain, compare, or shorten one’s temper as one gets older. This isn’t just in the arena of the aging – it is with us at every step, but Rolheiser observes something vulnerable when he says it is more the case of “angry people growing old;” it is becoming aware of disappointments, and old wounds; of struggling in the last half of life with forgiveness and anger; it is, ultimately, struggling with God.

He notes that great figures of the faith are not in the habit of easily saying: “Thy will be done!” but often, for a while at least, counter God’s invitation with: “Thy will be changed!” This is a bit of what I get at in my post “Wanting to be Heard.” Sometimes our prayers are sweet things of connectiveness; other times they are like throwing Molotov cocktails into the presence of God. Might it often be wrestling with God?

I am still pondering the enigma of what it means to be thankful (note “Gratitude and Wisdom).” Perhaps the struggle with God is to see the world as He sees it – that is to say – to see the world as it is (His worldview). I suspect real spiritual insight is to recognize the mirage that lies between simple positivity and ungracious criticisms. There is something about the gift of thankfulness that allows us to walk the rough terrain and (still) be able to be content.

In the mean time, wrestle on!  Grab hold of Him and don’t let go!

3 thoughts on “Wrestling with God”