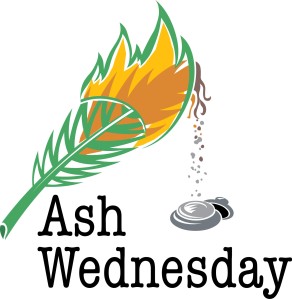 Tradition to save the Palms used in Palm Sunday the previous year, and to burn them to make the ashes for Ash Wednesday the following year.

This Wednesday is known in the Church Calendar as Ash Wednesday – the beginning of a season of Lent – typically a time of fasting leading into Easter.

The Teutonic word Lent, is used to denote the forty days’ fast preceding Easter, originally meant no more than the spring season. Still it has been used from the Anglo-Saxon period to translate the Latin term quadragesima, meaning the “forty days”, or more literally the “fortieth day”.

Lent may be suffering the indignity of being a time to stave off chocolates and coffee; some have added modern electronic fasts from Facebook, Twitter, etc. But such fastings, though good, can be reduced to mere religious acts if one doesn’t connect them to the spiritual life. The reflections of Edna Hong awaken us to our need for a deeper look:

In other words, a guilty suffering spirit is more open to grace than an apathetic or smug soul.  Therefore, an age without a sense of sin, in which people are not even sorry for not being sorry for their sins, is in rather a serious predicament.  Likewise an age with a Christianity so eager to forgive that it denies the need for forgiveness.  For such an age, therefore, Lent can scarcely be too long!

The Symbol of the Rooster in early Christian art: 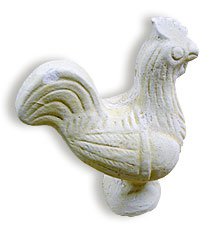 It is in this discussion about the arousal of spiritual insight that it may be of some surprise that the early Christian symbol in Roman catacombs was not the cross, or the fish, but the rooster (?).

To the right: Replica of a early 2nd century AD Roman cockerel terracotta originally deposited in a grave of “Older Praunheimer burial ground.”

The rooster has been used by other cultures/religions to symbolize different meanings, but among early Christians, it meant “convictio” – the conviction of sin. This is based on the gospels reminding us that during the Last Supper, Jesus foretold of Peter’s denial: that he would deny Christ three times before the cock’s crow. Early Christians were aware of their own arousal to the conviction of sin, and to the need for forgiveness that comes through faith in Jesus’ sacrificial death and resurrection. The rooster, however depicted on their casket, was to say, “I was a sinner, I needed forgiveness, I am going to the One who has forgiven me, and who now welcomes me into His presence.” 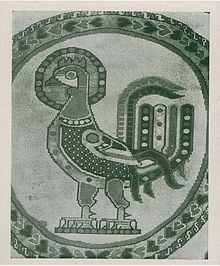 Vatican Persian Rooster – A 1919 print of a fabric square belonging to the Vatican in Rome dating to 600 C.E.

The rooster as a religious vessel found in the Catacombs from the earliest period including a painting from the Catacomb of St. Priscilla reproduced in Giovanni Gaetano Bottari’s folio of 1754, where the Good Shepherd is depicted as feeding the lambs, with a crowing rooster on His right and left hand. Similarly a multitude of sarcophagi are found with the rooster and the sacred cockfight signifiying the role that conviction and repentance play in the spiritual life.

Pope Gregory I (540-604 AD) declared the rooster the emblem of Christianity saying it was “the most suitable emblem of Christianity”, being “the emblem of St Peter.” Some say that it was as a result of this that the rooster began to be used as a weather vane on church steeples; a Papal enactment of the ninth century ordered the figure of the rooster to be placed on every church steeple, and it is known that Pope Leo IV (790-855 AD) had the figure of the rooster placed on the Old St. Peter’s Basilica (old Constantinian basilica). The rooster has served as a religious icon and reminder of Peter’s denial of Christ since that time… until now?

As Ms. Hong laments, “an age without a sense of sin, in which people are not even sorry for not being sorry for their sins, is in rather a serious predicament. Likewise an age with a Christianity so eager to forgive that it denies the need for forgiveness. For such an age, therefore, Lent can scarcely be too long!”

We live in such an age where the dogma of our time is Universalism. On the surface it sounds good and right; it flattens out the modern distasteful view of a Judging God however Just He may be to judge; it takes away the sting of sectarianism; it eliminates the need to be doctrinaire; and it reduces Jesus sacrificial crucifixion to a historical note. But Universalism threatens to implode on its own worthlessness. Simply put, the life and death and resurrection of Jesus Christ, His character, teaching and power to forgive and redeem, are all artifacts to a universalism that forgives without repentance, and accepts everything except exceptionalism.

I harken you back to the enigma of the eternal. He who created the heavens and the earth, who has always been in eternal friendship as Father, Son and Holy Spirit – is the One who restores the relationship we had broken. Not redeemed by religious activity, not by trickery or magic, He restores our souls to Himself by His own gracious initiative of relationship – and He does this by the “convictio” of His own Holy Spirit who “arouses in us the sense of sin, the sense of guilt for sin, the humble contrition for the guilt of sin that makes forgiveness possible, the sense of gratitude for the forgiveness of sins, and to motivate the works of love and the work for justice that one does out of gratitude for the forgiveness of one’s sins.”

With apologies to John Donne, “Ask not for whom the rooster crows, it crows for thee.”  As Ms. Hong said, “a guilty suffering spirit is more open to grace than an apathetic or smug soul.” Everyone who would live and die and live eternally to Christ will recognize this.

4 thoughts on “Lent and the Rooster Crow: “Convictio!””