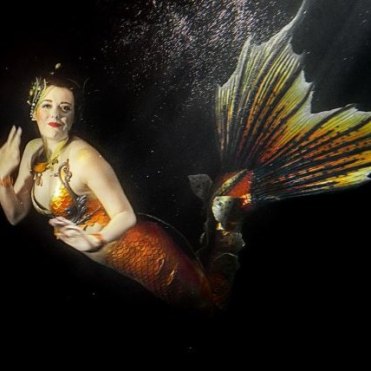 Dreaming of being a fish… or a mermaid or what?  (Raina of the Halifax Mermaids).

I suspect one of the early signs of maturity is when we contend with the death of a dream.  We get used to it; maybe too easily.  Some dreams are the fantasies of youth; others – the nightmares of woundedness; while others still are the confusions of a muddled mind.

In Edmonton, there is a flap over the use of mermaid tails (mono-fins) that has motivated “24 year old stay-at-home mom” Krista Visiniski, to start an online petition to remove the ban of their use in Edmonton Public Pools. In the Edmonton Journal article, Ms. Visiniski is quoted as saying:

The reactions come from far and wide, and they are telling:

Kevin Tillmon of Orlando opines: “people have the right to full fill (sic) their dreams.”

Stephanie Brown who goes by the stage name, Raina of the Halifax Mermaids, writes: “Mermaid swimming has been around over 100 years starting with feminist icon Annette Kellerman who became a fitness and activist role model for girls everywhere.”

The Lacroix sisters of Edmonton send their tandem notes: “my sister is a mermaid,” followed by the sister who affirms, “because I am a mermaid.”

Even Cookie Ramirez of New York gets in on the petition, “Because I too am a Mermaid.”

What is going on here?  Do these people actually think they are mermaids?  Is this feminism mutating into a different evolutionary “icon”?  Do people really have the right to fulfill their dreams?

Aside from the argument about whether people be allowed to wear mono-fins in a public swimming pool (in other words, this is a bit of a tempest in a teapot) – the “stated reasons” in favour of the practice are bizarre!

Meanwhile the huge international story about a person dreaming to be something else is Bruce Jenner coming out as transgender.  In the reality TV hit, “Keeping up with the Kardashians,” poor Bruce often appears to be the regular punch line to a joke, but suddenly he is the darling of the politically correct.  According to the Guardian, Jenner “throws the focus on a new civil rights frontier.”

… Bruce Jenner, America’s most famous stepfather and symbol of masculinity after winning Olympic decathlon gold in 1976, will join the powerful Kardashian matriarchy after appearing on US prime-time TV to announce “for all intents and purposes, I am a woman”.

The family patriarch in Keeping Up with the Kardashians, father of supermodel Kendall Jenner and stepfather of Kim Kardashian, told ABC’s Diane Sawyer – the last interview, he said, he’d give as a man – that God had given him “the soul of a female”, that “he dreamt as a woman” and that he’d “lived a lie his whole life”.

Jenner told US viewers that he had felt out of place in his birth-assigned gender from the age of six and had cross-dressed through three marriages. “I just can’t pull the curtain any longer. Bruce lives a lie. She is not a lie. I can’t do it any more,” Jenner said.

Fred McConnell insists, “… using a person’s preferred pronouns is about respect… When it comes to understanding gender dysphoria, forget grammar rules and proper English because language – like gender and sexual expression – is fluid.”  However McConnell does point out what is obvious about the little respect Jenner has received before coming out. But is McConnell somehow making the case that Jenner deserves respect merely for self-identifying as a woman?

“Only he [Jenner] knows what he feels, and while those feelings are complicated or private, all that matters to him is our respect, something that he hasn’t been shown much of in recent years.”

Respect: a loaded word or a code for silence?

As is typical in these discussions, “respect” is often used as code meant to silence the more difficult discussion about “discernment” (in contrast see: R-E-S-P-E-C-T). There is no room to have a more profound conversation in this seven-second-soundbite world. Anyone who would dare question Bruce Jenner’s coming out is likely to be labeled “transphobic,” thus ending any discussion. There need be no fear of a person dreaming to be something other than what they are. But Jenner’s dream about being a woman, and Visiniski’s dream about being a fish is part of the dimness of our plight when we do not know the One who made us for Himself.

Talusan is right when she asserts that “Jenner isn’t any less human or worthy of kindness” – but it is not by virtue of self-identifying as a woman or transgender, or even being diagnosed with gender dysphoria (as McConnell seems to imply). Jenner, and Visiniski, and others who struggle with their identities and dreams, are “not any less human or worthy of kindness” – because the fact is, they are not any more human by virtue of their confusion; our universal worthiness of kindness is secured by virtue of the fact that we are persons created by the One who made us for Himself.

But herein lies the unspoken (and incorrect) notion of “kindness” that dare not say a contrary word. Costly kindness (might we say, “real kindness”) speaks the truth in love. Indeed it is unkind to not exercise discernment in these confusing times. It is unkind to suddenly give poor Bruce Jenner this odd respect when people were not willing to give this to him before.

These are unkind days, not just because of unkind speech, but because these are undiscerning days. Woe to us.

What are you dreaming to be?

4 thoughts on “Trans-Identity (Part I): Dreaming of being a fish”