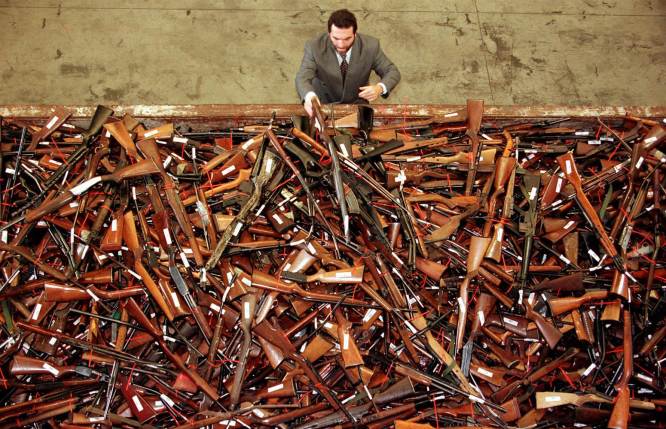 A pile of about 4,500 firearms that were handed over as part of Australia’s buyback. David Gray/Reuters

“Australian comedian Jim Jefferies was the victim of a home invasion once. He was tied up and beaten, and his girlfriend was threatened with rape. So you might think he’d sympathize with the idea that Americans want guns to protect their families. Quite the opposite — he does an excellent job of summing up why so many foreigners are baffled by America’s gun culture” (Amanda Taub, Vox.com).

One of Jefferies’ funnier observations is that the Second Amendment (the right to bear arms) was written when the worst weapon a person could own was the knuckle-balling-miss-as-much-as-you-hit “musket” (December 15, 1791).  Rifles, and especially assault rifles, would come much later. One can only wonder what kind of society the U.S. would have en-culturated, had their Second Amendment stated they had the right to bear “muskets”, rather than the wide-open to interpretation “arms.”

Jefferies refers to the Australian experience of the Port Arthur Massacre in 1996 that he claims is still the worst single gunman violence on record any where; it is this event that served to change Australian attitudes and laws toward gun control. In contrast: Sandy Hook. 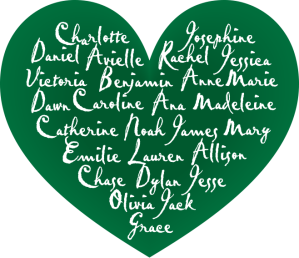 On December 21, 2012, one week after the unspeakable Sandy Hook Elementary School Massacre, the National Rifle Association’s Wayne LaPierre connected gun violence with “gun-free zones” (that he claimed actually attract killers). He called on Congress “to appropriate funds to hire armed police officers for every American school and announced that the NRA would create the National School Shield Emergency Response Program to help.”

But it is with breathtaking NRA logic that Mr. LaPierre articulates his answer to the gun violence problem: “the only way to stop a bad buy with a gun is with a good guy with a gun.” Even anticipating the scorn he and the NRA would receive, he didn’t bother to consider the epistemological difficulties of identifying who the good guys are… any more?  Is it You? Me? Is a good guy only self identified? If so, then the “bad” guys are as “good” as anyone else in this time of massive identity confusion.

Following a recent shooting in Virginia, A.J. Somerset isn’t convinced that change is coming anytime soon to the american gun culture. He’s a sport shooter and former Canadian soldier who has written about the evolution of gun culture in a new book, Arms: The Culture and Credo of the Gun.

Somerset says that the U.S. is too deeply embedded in gun culture for these incidents to be catalysts for change. But what caught my attention was his insight to guns being an icon of identity:

[Problematic gun culture] is fetishizing the gun itself so that you invest your identity in the gun and the gun becomes a symbol of a bunch of values and beliefs that you hold. When you reach that point, then what happens is when anybody threatens any kind of gun regulation…they’re threatening your very identity.

Looking through the lens of our massive identity crisis, this is just another profound confusion. It will take more than gun control to change attitudes toward gun violence; it will take a massive identity shift to change our attitudes to gun control. Jefferies’ take (below) reveals this through dark humour. (For a provocative take, see “Would Jesus Wear a Sidearm?“)

Though I assume you live in “today” and are surrounded by profane language, I do not assume that you’d appreciate the humour or the language of Jim Jefferies. You should be forewarned that both the article, and the link to Jefferies’ comedy contains offensive language.

Of course, what can be more offensive than violence? This is not to excuse the language, but to challenge what might be a cultural apathy to gun violence. Thus, in my ongoing series on Remembrance Day and the place Violence plays in our lives, I leave you with Jefferies’ take on gun violence.

Also, I encourage you to watch the video at the end of the article: America’s biggest gun problem is the one we don’t talk about.

I welcome your comments on this post, this subject, or any others about which I write. For a contrary response to the Australian example, here is Jason Wilson’s “Spare me the sanctimonious Australian self-congratulations.”

For more, go to Put Your Sword Back!