All about Christ, Authentic Faith, Banksy, Christ with Shopping Bags, Christmas, Easter, For the Life of the World, Materialism, Vitality of Christ, Wardrobe Door to Narnia, Where did Christians go?, Where did Christmas go? 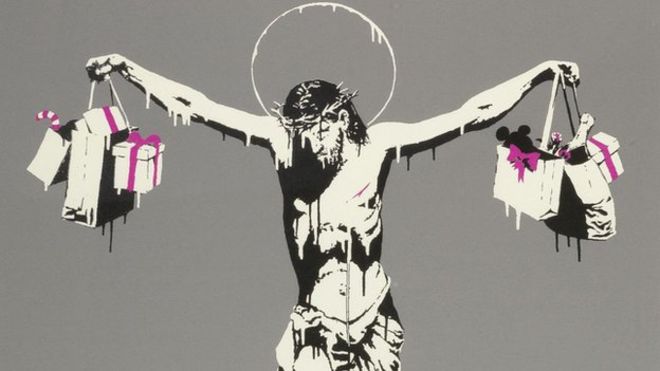 “Christ with Shopping Bags,” by Banksy

While the faithful wonder “where did Christmas go?”- the purchasing public decry how materialistic Christmas has become. Christmas didn’t go anywhere. It has become what “we” wanted it to become as materialism has waxed and faith has waned. Don’t blame me; I try to keep Christmas simple and enfolded in family, while admitting that Christmas was not a “high holy day” in the early formation of Christian faith. It is not Christ’s birth that is of supreme worth to Christians; it is His life, death, resurrection, and ongoing spiritual presence that the authentic faithful value.

Even street artist (and modern day prophet?) Banksy gets the irony of having the Crucified Christ holding the self-contradictory shopping bags in His outstretched arms. If there is something to be remembered in Christmas – it is Easter!

Perhaps the real question is: “where did Christians go?”

As Advent begins in the Christian calendar, it is worth asking where have Christians hidden or escaped?  While Christians are being displaced in much of the 10-40 Window, those in the opulent West have been displaced from the eternal by the trinkets of modernity. It is a profoundly unfair trade deal that betrays how much worth has been forgotten, and how much monitary stimulation has been apprehended.

“Only the wealthy,” Craig M. Gay writes, “can afford to place all their aspirations in this age.” The loss of the eternal is not merely a philosophical funeral, it is the void that siphons vitality out of every value of human living. Christians who still apprehend the eternal are to be salt and light for the life of the world.

Christmas: a doorway to a wider wonder world

Christmas is a spiritual marker of the eternal into the temporal. Those who have trust awakened in them to seek the Christ of Christmas soon find that it is rather more like the Wardrobe door into Narnia than like the musty confines of a closeted religion. “I am the gate,” Jesus says, “all who come in will go out to a wider wonder world.”

Where did Christmas Go?

The irrelevance of the question ought to jar us out of our spiritually-diabetic slumber so that we would seek the authentic over the virtual-but-not-real reason for the season. Once you find the One who is finding you, you’ll get it; there is nothing about Christmas worth saving if it isn’t about Christ.

8 thoughts on “Where did Christmas Go?”