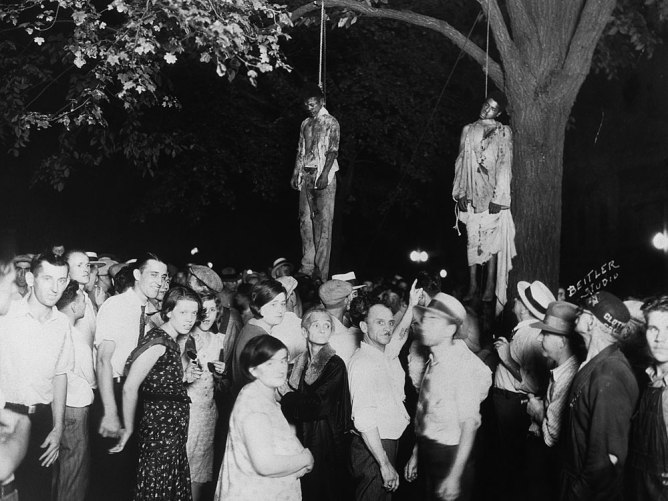 On Aug. 7, 1930, Lawrence Beitler took this photograph of Thomas Shipp and Abram Smith, lynched in the town center of Marion, Ind., for alleged murder. The case was never solved.

This image of the lynching prompted the poem by Bronx schoolteacher Abel Meeropol, “Strange Fruit,” which became lyrics to a well-known Billie Holiday song:

Southern trees bear strange fruit,
Blood on the leaves and blood at the root,
Black body swinging in the Southern breeze,
Strange fruit hanging from the poplar trees…

It is a haunting melody, sung with lament in the current of bewilderment; and in this day of “Black Lives Matter,” we still see strange fruit. Admittedly this is neither a normal image or topic for Christmas – but forget the Mandarin Oranges in season, we have our basket full of bitter fruit.

Truth be told: strange fruit grow from strange seeds. Beliefs have consequences; they are seeds that erupt with eventuality, and betray the goodness or corruptibility of their origins. No idea gets away without a trace: not ISIS, not Police violence, not killing in the name of pro-life (sic).

How are we to understand another senseless killing, this time by Robert Dear in the place that Josiah Hesse calls, “the playground of pro-life pro-gun Evangelical Christians?” 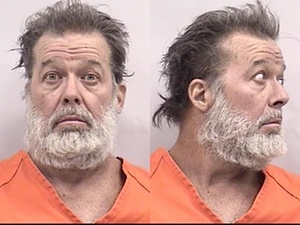 Robert Dear is shown in a police booking photograph. Is this the face of “a good guy” with a gun?

What were the strange seeds that bore the strange fruit of killing in the name of “pro-life?” According to the breathtaking NRA logic of Wayne LaPierre, is Mr. Dear to be considered “a good guy with a gun?” Or did he just have a bad day?

Or worse, are his actions to be considered the logical fruit of the ideas leading to a “just war” against abortion? Can there be anything more illogical than killing in the name of life?

It is not lost on me that this took place on the eve of Advent. This reckless killing betrays what is subterranean and wicked about the “acceptable” place of violence on our culture. And all President Obama can do is again, exasperatingly say “enough is enough.”

Some might think I am unfair for suggesting that Robert Dear is a good guy with a gun based on his murders – but until one bullet was discharged, I suspect this is exactly what some in the pro-life, pro-gun camp would have thought. Indeed, we can now re-evaluate Mr. Dear’s “goodness” in light of the badness (his murderous actions) of his fruit.

Though we want to (and can even talk ourselves into) thinking Mr. Dear is merely a deranged nut-bar with the means to do damage, the reality is he could’ve been quite comfortable among the more violently-inclined pro-lifers (a contradiction that never ceases to confound me).

The Ends do Not justify the Means

The ends do not justify the means: to stop abortions cannot be achieved by killing those who kill pre-born humans; the reduction to the astronomical numbers of abortions will take a lot more listening, caring, loving, supporting than we can possibly conceive. There are no short-cuts to the work it takes to dignify every life… and that starts with you and me.

Besides, the raison d’être for followers of Christ is not to be reduced to stopping abortions. That is too small an idea, too tiny a movement to bear the richness and depth and height of the Gospel of Jesus Christ. We are to be ambassadors of reconciliation – His reconciliation; we are to expose the enigma of our worth, and to dignify the personhood of the one (and everyone) in front of you.

Thus, the contrast of Mr. Dear’s actions must be seen as the strange fruit of strange seeds – seeds that do not find their source from the Lord of Life. There needs to be a bold evaluation of ideas from their onset. What Our Lord Jesus says in Matthew 7:16-20 takes radical faith to apply in order to be consistent with His character:

By their fruit you will recognize them. Do people pick grapes from thornbushes, or figs from thistles? Likewise, every good tree bears good fruit, but a bad tree bears bad fruit. A good tree cannot bear bad fruit, and a bad tree cannot bear good fruit. Every tree that does not bear good fruit is cut down and thrown into the fire. Thus, by their fruit you will recognize them.

I can barely spit out “Merry Christmas” in light of the ruined lives, the loss of loved ones, the corruption of goodness that stains this Advent season. Nevertheless I am convinced that truth, life, and peace invaded and continues to invade this world to work against the very things we grieve. In Christ we find the good seeds for good fruit that He Himself bears in those who receive Him still.

Right on cue, we can see how strange fruit grow from strange seeds in Jerry Falwell Jr.’s unspeakable call for Christian students to carry concealed weapons in order to “end those Muslims before they walked in.”

I highly recommend you read Chris Gehrz’s post: “The Shadow of Death: A Response to Jerry Falwell Jr.“

Further, for a typically thorough response, see John Piper’s “Should Christians be encouraged to Arm Themselves?“

For a confessional perspective go to “Prayer Shaming.”

2 thoughts on “Strange Fruit for Christmastime”