Butterfly Cocoons, Chrysalis, Cocoon for the incubation of thought, God is Love, Jesus came telling Parables, More Enigma than Dogma, More Latitudinarian than Luditian, More Parabolic than Implacable, Parables, Seek and you will find, Triune God, What Language Shall I Borrow?

The featured image of “Dios es amor” on a mouldy blue brick wall was taken years ago when a friend and I went to visit men recovering in an alcohol & drug treatment centre in the Dominican Republic. While many go to this island for a vacation destination – I sat in a small courtyard on a plastic chair in a circle sharing our coming-alive stories. The image of the little “God is love” caught my attention in the humid heat and among the sad stories of human detritus. God is love; but how can that be known in the depths of addiction?

There, the men were just beginning to recover and come alive to the revelation of their worth as persons, while I was just starting to put into words the nature of my own spiritual journey – the journey of coming to know my worth to the One who made me for Himself.  And as I rejoice to repeat: this says so much more about the One who loves me than it says about me – the one who is loved.

Along the way I have been thinking about all the sundry and varied ways God speaks and has spoken to me; the mysteries and secrets; the things that don’t add up – and the beauty of things that are greater than the sum of their parts.

The awe beckoned from beauty compels me to the mystery. I follow a person who primes me with puzzles. I marvel, without putting too fine a point on it, that Jesus came telling parables. One scholar writes:

The importance of the parables can hardly be overestimated. They comprise a substantial part of the recorded preaching of Jesus. The parables are generally regarded by scholars as among the… authentic words of Jesus. Moreover, all of the great themes of Jesus’ preaching are struck in the parables.

When Jesus was alone, those who were around asked Him about the parables. He answered with a reference to Isaiah 6:

“To you has been given the secret of the kingdom of God, but for those outside, everything comes in parables; in order that:

‘they may indeed look, but not perceive,
and may indeed listen, but not understand;
so that they may not turn again and be forgiven.’ ” (NRSV, Mark 4:10-12)

Jesus’ explanation seems harsh and out of character,” writes Boucher. “Was He deliberately trying to hide the truth by speaking in parables? Were the mysteries of the kingdom of God to be known only by the disciples? Both experts and lay persons are puzzled, and many different explanations have been proposed.

Jesus’ reference to Isaiah 6:9-10 connects us to a people so lost in sin that they (we?) resented hearing God’s Word and deliberately turned away. Barclay explains it this way:

So Jesus spoke his parables; he meant them to flash into men’s minds and to illuminate the truth of God. But in so many eyes he saw a dull incomprehension. He saw so many people blinded by prejudice, deafened by wishful thinking, too lazy to think. He turned to his disciples and he said to them: “Do you remember what Isaiah once said? He said that when he came with God’s message to God’s people Israel in his day they were so dully un-understanding that you would have thought that God had shut instead of opening their minds; I feel like that to-day.” When Jesus said this, he did not say it in anger, or irritation, or bitterness, or exasperation. He said it with the wistful longing of frustrated love, the poignant sorrow of a man who had a tremendous gift to give which people were too blind to take.

If we read this, hearing not a tone of bitter exasperation, but a tone of regretful love, it will sound quite different. It will tell us not of a God who deliberately blinded men and hid his truth, but of men who were so dully uncomprehending that it seemed no use even for God to try to penetrate the iron curtain of their lazy incomprehension. God save us from hearing his truth like that! (Barclay, commentary on Mark 4:1-12)

By nature, a parable invites the listener to contemplate; to think deeper, higher – with a wider latitude than getting simple answers supplied at that back of the book (or in the book at all).

We are left to figure things out… or not.  To seek and find… or not.  God doesn’t appear to be troubled if we ignore Him, but is completely present to those who seek Him.  We can be sure that Jesus wants us freed from a deadening approach to revelation. “You diligently search the scriptures,” Jesus says to experts of the law, “because you think in them you possess eternal life – but these are the very Scriptures that testify about me, yet you refuse to come to me to have life.” (John 5:39, 40)

The point of the word, the book, the search is to find the person of Jesus.  “Finding” is a loaded term, isn’t it?  I would not want to give the impression that finding means fully understanding; it is more like finding someone who has been waiting to be found – someone wanting to find you finding Him. In fact, in the end, we will marvel if we found anything other than the One who finds us and knows us profoundly.

Over time, searching the solid doctrines that were helpful “Sunday School” answers to complex questions moulted off like a dead chrysalis of a butterfly. That is not to say they were wrong, or bad. It is to say, in my clumsy way, there is so much more to the spiritual life in Christ that can be known in mere dogma, though dogma seems to act as a cocoon for the incubation of thought & life. 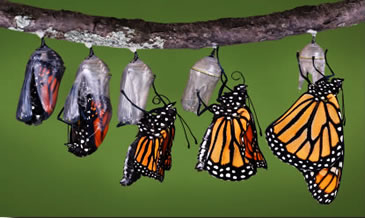 Take the mystery of God-as-Communion.  The Trinity is a wonderful doctrine that I would describe as the doodling of theologians on the artwork (the face?) of the living God. But we start somewhere to explore the nature of this Three-In-One God. As I said in What Language Shall I Borrow, we have to create a language to attempt to simply get our hands on the in-apprehensibleness of the Triune One.

But you see, this is what draws me to the mystery.  It draws a ribbon in space, as Annie Dillard writes, “a ribbon whose end unravels in memory while its beginning unfurls as surprise.” It invites us to the grand terrain of a great expanse, and I wonder when the journey ends. It remains more… you know what.

I welcome your revelations along the spiritual journey.

10 thoughts on “More Enigma: An Explanation”