Americans go into the home stretch of a vote between two people who have been roundly accepted as the most unpopular choices in American history. At the same time – there has never been more mistrust of the media who cover the election process.

Last year – leading into the longest run up to the polls in Canadian history we experienced our own trust fatigue:

The growing mistrust of all advertising?

It is even more alarming to witness the free-fall distrust of the entire advertising industry (after all, politics is merely a form of advertising). The Globe and Mail reported that Canadians [are] wary of digital ads:

“Is the Internet a dishonest, scam-ridden, unregulated Wild West?

[In a] survey commissioned by ASC and conducted by research firm the Gandalf Group… [it was] found that consumers are wary of digital ads. Among the reasons given for their lack of trust, the most common were that the ads are false or manipulative; that the Internet is unmonitored and uncontrolled and people can say anything there; and that ads often link to scams such as phishing and malware.

Canadians don’t trust social media, despite being one of its biggest users

“These are relatively new industries, they haven’t had a lot of time to accumulate baggage … but there’s something about what’s going on that is not creating trust.”

Tom Regan speculated on why people distrust the news media as the public reach historic lows in trusting any mass media, especially in these times when U.S. media are explicitly political.

Media Fact Checkers are as distrusted as the mis-fact spewers

It should come as no surprise that people don’t even trust media fact checkers either. According to Rasmussen Reports: 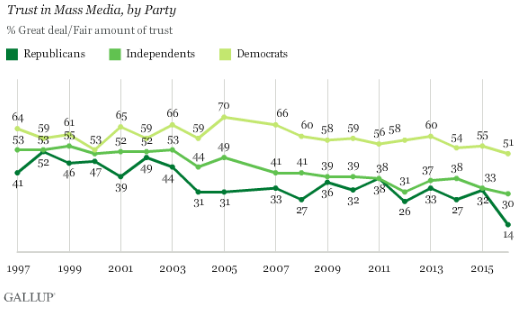 The Atlantic asks “Why do Americans Distrust the Media?.” Derek Thompson writes:

“Trust is a slippery measuring stick. Do I “trust” technology? Well, I trust strangers on Uber to be on time, but don’t trust my cable company to arrive within a four-hour window; I trust my iPhone to not explode, but don’t trust my email to be unhackable. Asking whether I trust “technology,” yes or no, is asking for an non-summarizable opinion of a diverse group of products and people, which fall along a continuum of confidence.

“The media,” like “technology,” is not a single tangible object, but rather an information galaxy, a vast and complex star system composed of diverse and opposing organizations, which are themselves composed of a motley group of people, each of whom are neither all good nor all bad, but mostly flawed media merchants, with individual strengths, weaknesses, biases, and blindspots.

With these enormous caveats out of the way, the fact remains that Americans’ “trust” in “the media” is falling steadily, according to Gallup. Even if the precise definitions of these terms is debatable, the overall decline is clear and noteworthy.

May there be wisdom among the people who vote, and may we somehow regain trust in the systems that were meant for the common good – for no nation can endure the erosion of the rule of law, the increase of anarchy, the mistrust of her justice systems, or distrust of the fifth estate that report on them.

For more, read: Political but Not Partisan

1 thought on “Mistrust, Media and other Advertising Scams (Elections)”