American Declaration of Independence, Aspirations, Be inspired, Birth of a Nation, Conceptual Robustness?, Decipher the enigma of our worth, Ennobling and Effective Action, Fawning Fans of Facebook, Inspirations, Intellectually thin, Living Curriculum of the Christian Life, Lululemon, Manifesto, Occupy Wall Street, Radically shifting regimes, Technology as an agent of change, Wikileaks, Your manifesto, Your Personal Manifesto 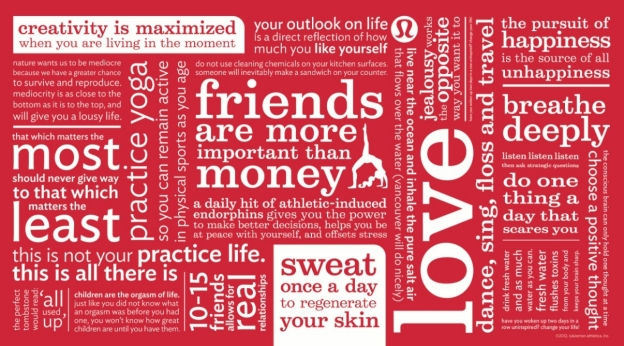 Lululemon’s manifesto is all over their products. Lululemon

This manifesto probably needs no introduction:

… but in these days, the Declaration of Independence needs to be re-read with attention to its aspirations:

“When, in the course of human events, it becomes necessary for a people to advance from that subordination in which they have hitherto remained, and to assume among the powers of the earth, the equal and independent station to which the laws of nature and of nature’s god entitle them, a decent respect to the opinions of mankind requires that they should declare the causes which impel them to the change.

We hold these truths to be sacred and undeniable selfevident, that all men are created equal and independent; that from that equal creation they derive in rights inherent and inalienables, among which are the preservation of life, and liberty and the pursuit of happiness; that to secure these ends, governments are instituted among men, deriving their just powers from the consent of the governed; that whenever any form of government shall become destructive of these ends, it is the right of the people to alter or to abolish it, and to institute new government, laying its foundation on such principles and organizing it’s powers in such form, as to them shall seem most likely to effect their safety and happiness. prudence, indeed, will dictate that governments long established should not be changed for light and transient causes….”

Written in 1776 in a historical context – in a world where these things were not “self evident” – this document inspired the birth of a nation, and became a template for other nations aspiring to independence from their colonizers, their oppressors, or their pasts.

The Occupy Wall Street Manifesto takes some liberties with the Declaration:

“We hold these truths to be self-evident, that all men, women, and transgendered—and any other human who is able to elude the tyranny of work for a couple of weeks—are created equal. We gather to be free not of tyranny, but of responsibility and college tuitions. Prudence, indeed, will dictate that a government long established and a nation long prosperous be changed for light and transient causes. So let our demands be submitted to a candid world.

First, we are imbued with as many inalienable rights as a few thousand college kids and a gaggle of borderline celebrities can concoct, among them a guaranteed living wage income regardless of employment and immediate across-the-board debt forgiveness…”

Admittedly it is a rambling mess that inspired a protest that could not sustain itself.  It is, unfortunately, intellectually thin, despite its desire for justice (I think?). In a way, Occupy Wall Street was more committed to protest than to change. This document certainly didn’t have the conceptual robustness to inspire more than a tantrum, even if the reasons for protest were legitimate.

On February 16, Mark Zuckerberg posted this in response to a legitimate question:

“On our journey to connect the world, we often discuss products we’re building and updates on our business. Today I want to focus on the most important question of all: are we building the world we all want?…

Facebook stands for bringing us closer together and building a global community. When we began, this idea was not controversial. Every year, the world got more connected and this was seen as a positive trend. Yet now, across the world there are people left behind by globalization, and movements for withdrawing from global connection. There are questions about whether we can make a global community that works for everyone, and whether the path ahead is to connect more or reverse course.

This is a time when many of us around the world are reflecting on how we can have the most positive impact. I am reminded of my favorite saying about technology: “We always overestimate what we can do in two years, and we underestimate what we can do in ten years.” We may not have the power to create the world we want immediately, but we can all start working on the long term today. In times like these, the most important thing we at Facebook can do is develop the social infrastructure to give people the power to build a global community that works for all of us.”

However sincere Zuckerberg intended this document to be, his own history betrays his credibility. My skepticism aside, if you go to the bottom of this 5700 word document, you will see the response he gets (allows) from the fawning fans of Facebook.

In the theme of technology being an agent of change, and as modern movements go, the Wikileaks phenomenon cannot be ignored.

The Wikileaks Manifesto by Julian Assange:

“To radically shift regime behavior we must think clearly and boldly for if we have learned anything, it is that regimes do not want to be changed. We must think beyond those who have gone before us, and discover technological changes that embolden us with ways to act in which our forebears could not.

Firstly we must understand what aspect of government or neocorporatist behavior we wish to change or remove. Secondly we must develop a way of thinking about this behavior that is strong enough to carry us through the mire of politically distorted language, and into a position of clarity. Finally we must use these insights to inspire within us and others a course of ennobling, and effective action.”

One wonders if Assange himself understands “what aspect of government or neocorporatist behaviour he wishes to change or remove.” I am not sure he is the one who can “inspire within us – a course of ennobling and effective action.”

Despite my criticisms, we do all want to be inspired to take ennobled and effective action – and many go so far as to articulate one’s own manifesto. (In the theme of “Wiki“, here is a site devoted to “Wiki How to write a Manifesto“).

What does a personal manifesto do for you?

It focusses your limited intellectual, emotional, financial, temporal, and spiritual resources toward a goal worthy enough to invest the remains of the day, and to energize action consistent with your core values and aspirations.

Since I am aware of my own diminishing resources with age, there is a kind of renewed refining that has been taking place:

As I enter the third third of life, I am becoming aware of the role of elders today:

“to enlarge spiritual vision, being devoted to prayer, living in the face of death, as a living curriculum of the Christian life.”

I am a life long and life wide learner who seeks to: