An unmitigated disaster, Even the ground, Feeling taken advantage of, Good intentions misplaced?, Is it just business?, NBA, Paying Up, Professional Basketball, Professional Sports, Take a pay cut, The DeRozan Saga, Who decides?

In this “Take a Pay Cut” series, I have not questioned the inequality that exists in certain industries; rather, I’ve been questioning who gets to decide who takes a pay cut (that is, who is forced to take a pay cut for the sake of someone else) in Hollywood’s politically correct world.  I have also expressed my suspicion that those who are entitled with over-inflated salaries ought to look in the mirror when they make it only about gender politics. 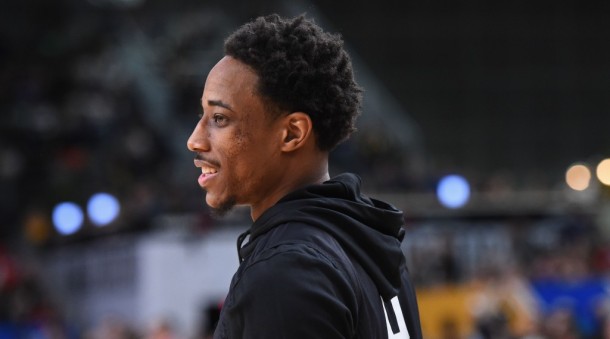 As I’ve been preparing this series over the summer, there emerged the shocking NBA trade that saw Toronto Raptors star DeMar DeRozan unceremoniously traded away like a bag of basket balls.  What made the trade so egregious was the fact that DeRozan was a loyal player “who literally stated publicly how much he loved the Raptors, the city of Toronto, and all of his talented teammates. He couldn’t have been more loyal to a franchise that has been largely irrelevant for most of their existence,” writes Nico Martinez in Fadeaway World. In his article on the “Sad Truth about DeMar DeRozan,” Martinez writes:

“There’s something else that makes this whole thing even more cringe-worthy.

While DeRozan is sure to enjoy the money he’s made in his lucrative NBA career so far, he actually took a $14 million pay-cut back in 2016 (when he was a free-agent), so that the Raptors could have more cap-flexibility in the future. He sacrificed to give the team a better chance to win, something most stars find it hard to do these days.

Not only did the franchise fail in surrounding DeRozan with a true Championship contending team, but they traded him away two years later for a guy who probably won’t stay for more than a year anyway.”

Oh well; good intentions misplaced by a player who himself suspended being “worthy of his pay”.  He’s not the first.  In 2010, LeBron James, Dwayne Wade, and Chris Bosh took at $15 million cut in order to play together with the hopes of winning a championship.  According to Matt Moore with NBC Sports, “it was an unmitigated disaster.”

Then there’s the case of Hall of Famers, Dirk Nowitzki and Kevin Durant, both of whom took huge pay cuts last July. Michael Bauman with the Ringer concluded this was “empty nobility” because it didn’t make “room for their teammates. They’re just saving money for their employers.”

Earlier this year Dan Feldman with NBC Sports wrote this of Durant, via Warriors Plus/Minus

Money has never been the sole reason why I made any decision. I just try to make a good basketball decision. And I’m sure, hopefully, the organization does right by me, as well. That stuff always has to align. But, for the most part, I try just to let my play do the talking and handle all that stuff. And we’ll talk about the details later.

Would he take another pay cut? Durant:

Me either. But I thought that, at that time, it was a good deal. But that’s not setting a good precedent for me if I’m like, “Man, I’m taking 10.” Now, they’re going to start taking advantage of me. You know what I’m saying? I know it’s a business, too. So, I’ve got a business to handle as well.

… Durant taking a pay cut later, considering the luxury-tax implications, would go much further than it did this year. But if he wants every dollar from now on – which increasingly sounds like his approach – Golden State could face some tough decisions.”

Don’t get me wrong; I think virtually everybody in the entertainment industry is overpaid, from Kevin Durant to Salma Hayek. Some people think I am too.

But who decides? Will it be only the politically correct? the State? the entitled?

Would you be willing to take a pay cut to benefit others where you work – the neighbourhood in which you live?

Is your generosity the expression of taking a pay cut? Is your charity the way you pay up to even the ground for those who have not enjoyed the privileges, entitlements, and access you’ve had?

Next week see: “If Only the Poor Knew“.