A plaintive wail, A Radical Redistribution of Love, A sense of alarm, Donald Trump, Financial Violence, In the middle of a revolution?, Provoked by Love, Shane Claiborne, Stuffing dollar bills into pockets, The deepest tragedy, Tragedy of not knowing the poor, Ubuntu, Unprecedented economic disparity 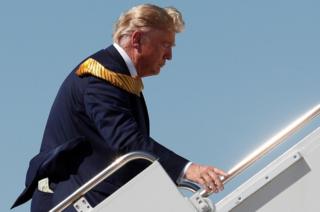 Banknotes protrude from US President Donald Trump’s back pocket as he boards Air Force One at Moffett Federal Airfield in California. Tom Brenner/Reuters; BBC: Week In Pictures.

In this month to consider the place of violence in our times, I want to look at the place of financial violence – the violence of unequal distribution that we can so carelessly ignore.

Shane Claiborne challenges our thinking on distribution in his article, “A Radical Redistribution of Love” (first published in Kolbe Times):

One of the first things that happened as the church was born that first Pentecost, 2000 years ago, is that Christians started sharing everything they had. They worshipped in their homes. The gospel was lived out of dinner tables and living rooms.

“We are living in a time of unprecedented economic disparity between the rich and the poor, the haves and the have-nots. Masses live in poverty so that a handful of people can live as they wish. The world’s three richest people own more than the combined economies of 48 countries. The average CEO in the U.S. is making 335 times the average worker.

In contrast, it was the ethic of the early Christians that no one had a right to more than they need while others have less. Basil the Great said,

When someone steals another’s clothes, we call them a thief. Should we not give the same name to one who could clothe the naked and does not?

But here’s the deal. Generosity cannot be forced or legislated. It has to be provoked by love. That’s why we’re not talking about a new form of socialism, or communism, or anything that ends in “-ism.” Redistribution comes from community, not before community. The early Christians did not have community because they shared stuff — just the opposite. They shared stuff because they had community. It is simply what happens when we are driven by a love ethic to love our neighbor as ourselves.

The deepest tragedy in our world is not that rich folks don’t care about poor folks. The tragedy is that rich folks don’t know poor folks. Statistics are not enough. Campaigns are not enough. We will never make poverty history until we first make poverty personal. That’s what happened in the early church — they had a new vision of family. They no longer had “rich” and “poor,” but only “brother” and “sister.”

Jesus is not saying to the poor, “Come find the church.” Jesus is saying to the church, “Go into the world. Find me where I am hungry. And homeless. And naked. And in prison.”But here’s something important: It is not about guilt. Jesus did not come to give us guilt, but to give us life. Someone once said to Mother Teresa, “I wouldn’t do that for a million dollars.” And she responded by saying, “Neither would I. But I would gladly do it for Christ.”

Where does it start?

I’m not pointing fingers at others without some sense that it all begins with oneself… and continues to influence others. As Claiborne says,

Generosity cannot be forced or legislated. It has to be provoked by love.

What happened to us?

“There is a sense that the capitalism that once made America an economic envy is responsible for the inequality and anger that is tearing the country apart.”

… Now that consensus is shattering. For the first time in decades, capitalism’s future is a subject of debate among presidential hopefuls and a source of growing angst for America’s business elite. In places such as Silicon Valley, the slopes of Davos, Switzerland, and the halls of Harvard Business School, there is a sense that the kind of capitalism that once made America an economic envy is responsible for the growing inequality and anger that is tearing the country apart.”

Last fall at the Harvard Business School, Seth Klarman, a highly influential billionaire investor, delivered what he described as a “plaintive wail” to the business community to fix capitalism before it was too late. Jaffe continues,

“The setting was the opening of Klarman Hall, a new $120 million conference centre, built with his family’s donation. “It’s a choice to pay people as little as you can or work them as hard as you can,” he told the audience gathered in the 1,000-seat auditorium. “It’s a choice to maintain pleasant working conditions… or harsh ones; to offer good benefits or paltry ones.” If business leaders didn’t “ask hard questions about capitalism,” he warned that they would be asked by “ideologues seeking to point fingers, assign blame and make reckless changes to the system.”

Six months after that speech, Klarman was struck by how quickly his dire prediction was coming to pass:

I think we’re in the middle of a revolution — not a guns revolution — but a revolution where people on both extremes want to blow it up, and good things don’t happen to the vast majority of the population in a revolution.

From, “What Happened to us? U.S. Billionaires worry about the survival of Capitalism.”

How are you being Provoked by Love?

For more a perspective on sharing, see “Ubuntu“.