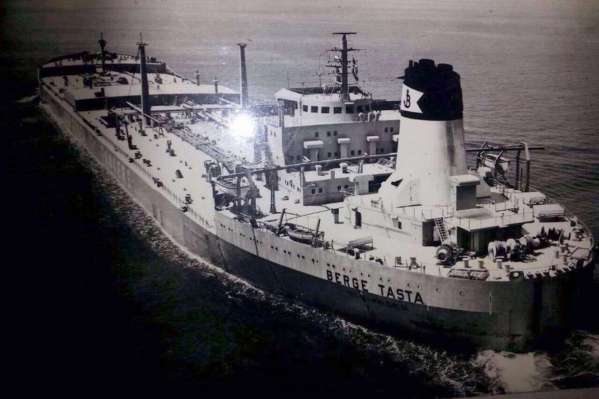 The Berge Tasta: Norwegian Ship that picked up Yen Siow and other Vietnamese boat people October 1980.

When I was in Singapore recently my son-in-law told me the story of a person he met at his church who was in from Australia looking for the crew that saved her when she was a Vietnamese boat person. The article below written by Yuen Sin was published in The Straits Times on Sept 3, 2016:

SINGAPORE – When she was barely four years old, Australian-Vietnamese social entrepreneur Yen Siow was one of the hundreds of thousands of refugees that fled the country in flimsy, overcrowded boats across the South China Sea in the years that followed the fall of South Vietnam to the communists in 1975.

Packed in a fishing boat meant for 10 people that was filled with 82 refugees desperate for shelter in any neighbouring country, the child and 12 members of her immediate and extended family spent five days adrift at sea in October 1980 with no land in sight, knocked about by severe storms.

They were running out of food and water, and the engine of the boat repeatedly stalled. Multiple ships passed by, but did not stop to help, said Ms Siow, 39, recalling what her older cousin had related to her of the traumatic experience.”

Why go out of the way to pick up Boat People?

“Why would they want to pick up boat people? We would be a burden to any ship, and were basically waiting for death to come knocking,” said the mother of three boys aged between five and 10, who is married to a Singaporean working in management consulting.

But on Oct 20, a Norwegian oil tanker by the name of Berge Tasta did just that. It passed by the rickety boat before turning back and welcoming them on board, eventually taking them to Singapore in late October 1980 where most of them were given shelter at the Hawkins Road Refugee Camp in Sembawang. The camp, which was run by the United Nations High Commissioner for Refugees (UNHCR) from 1978 and 1996, was the first and only refugee camp here.

On Aug 23 [2016], Ms Siow decided to start tracking down her Norwegian rescuers so that she can meet them to express her gratitude to them for saving her life. Armed with a postcard picture of the oil tanker that had been given to her cousin by a member of the crew on the ship, she made several posts on Facebook groups with ties to the Norwegian community here.”

The Providence of Finding Lost Connections

“She had merely asked for assistance in translating an e-mail into Norwegian, but received spontaneous offers of help from good samaritans on a group for expatriate women here, called Real Singapore Expat Wives. She was put in touch with two seamen who had been on the ship that saved her…

“We were all overwhelmed with so much joy and excitement when we first connected,” recalled Ms Siow.

“I really want to meet these people and say, you did the most awesome thing. You stopped in the midst of your travels to help strangers who you had no connection with. And today, I’m alive. And my family’s alive. My children are alive. And we are back in Singapore.”

The first, Mr Bernhard Oyangen, 54, was only 18 then and had been on his maiden voyage as a seaman… The second, Mr Per Pettersen, 63, was an engineer on the ship. Through e-mail, he showed Ms Siow a list of the names of all the 82 refugees the ship had rescued – including the names of her and her family members.”

“I was moved to tears when I saw the list, which connected the dots for me,” said Ms Siow, who hopes to travel to Norway with her parents, children and husband to meet him and other crew members in December or early [2017].

“I definitely will be giving the man the biggest hug, and will hold his hand, look him in the eye and say thank you – you went out of your way to give us shelter and a place to stay,” said Ms Siow.

From 1975 to 1996, Singapore hosted a total of 32,457 Vietnamese boat people. At that point, Vietnamese refugees who could prove they could go to another country afterwards were given food and temporary shelter here. Many were also able to find employment outside the camp as cooks, waiters and movers, among other jobs….

Ms Siow and her three siblings were resettled in Melbourne, Australia with her parents in March 1981, where they were granted citizenship. Her parents, now aged 67 and 65, took on jobs in factories and farms to support the children, and they relied on the kindness of strangers who donated items like furniture when they first moved into a two-bedroom rented apartment where six of them shared a single room.”

A Spiritual Desire to Pay it forward

“As a Christian, her desire to seek out her rescuers came from a spiritual desire to pay forward what others had done for her, and to understand her own purpose in life as she approaches her 40th birthday in October.

“Instead of completing a bucket list of amazing things that most people want to accomplish before they hit 40, I thought of doing something a little out of the box, and find out about how this whole experience of being rescued came about,” she said.

Relocating to Singapore from Melbourne early in 2015 because of her husband’s work was also a kind of happenstance that reminded her of her earlier connections to this country. As a way of showing her gratitude, she has been conducting educational workshops on a pro bono basis at several shelters…

“I really need to show honour and respect to a tiny nation that had nothing to do with the Vietnam war but still allowed us to have temporary refuge here. I also want to honour the Norwegian people who had helped us…what they did has touched many generations, and given us a future that we would never have had,” said Ms Siow.”

Putting together the Missing Pieces of the Puzzle

“She had learnt about her past from her father and other family members, and hopes to put together the missing pieces of the puzzle of the history that they had shared so that she can pass on the tale to future generations.

“One person’s actions has changed the course of someone’s life for eternity… I want to tell my own children that we need to be thankful for each day of life that we have. Without these rescuers who had showed us such generosity and kindness they wouldn’t have been around.”

Her own experience has taught her that every life matters.

For the rest of the article see: “Former Vietnamese Refugee in Singapore on Quest to find Norwegian Rescuers.”

One person’s actions changed the course of so many lives, for every life matters.

What is your experience of someone impacting the course of your life?

How does this story influence your view of refugees?

In what way do you need rescuing?

For more see, “The Radical Gospel.”

2 thoughts on “Of Refugees and Rescuers”