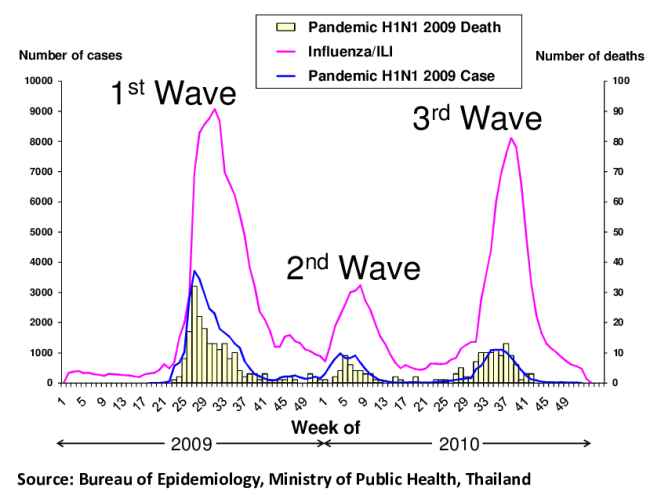 Three waves of the 2009 H1N1 influenza pandemic in Thailand.

Coming into Canadian Thanksgiving, we well may be licking our wounds, counting our losses, and tabulating our gratitude. We also may be dealing with the rebounding waves of the original outbreak, as epidemiologists have noted from previous pandemics like H1N1 in 2009/2010 (above).

Here we are some nine months from the onset of the Pandemic in North America, and there may be some trends we can notice.

Covid Births: with all that isolation – there’s bound to be a spike in “covid births” nine months later. For example the BBC reported:

In the Philippines, unintended pregnancies are forecast to spike by almost half to 2.6 million if Covid 19-induced movement restrictions remain until year-end, according to the United Nations Population Fund.

“These numbers are an epidemic in itself,” Aimee Santos, a spokesperson for UN agency in the Philippines, said last month.

Viral Divorces: conversely with all that isolation… there’s bound to be marriages that break down; a great desire for social distancing after too much social closeness. (See Pandemic ‘pressure cooker’ is driving more couples to seek advice about separation, divorce).

Pandemic Suicides: with this fear and anxiety, our suicide rate will likely have spiked, adding to what is already the leading cause of death in most western nations.

This phenomenon is illustrated in the image below:

In an article titled, “Is an ‘echo pandemic’ of mental illness coming after COVID-19?“, the authors wrote this in April:

“Whether you are on the front-lines in a hospital, nursing home or grocery store, or standing on the sidelines – doing your part by staying home – this pandemic is causing widespread anxiety, fear and dread.

People are afraid of the illness and what it could mean for them or their loved ones, but also about losing their jobs and paying their bills, and when, if ever, life will feel normal again.

Mark Henick is a mental health advocate, speaker and strategist who worries that once the virus emergency is brought under control, it could be followed by “a sort of echo pandemic of depression and anxiety and potentially even suicide” in the midst of “the carnage that this virus has left behind,” he told CTV News medical correspondent Avis Favaro.”

Being Fathomed by the Unfathomable

We hardly know what to do with these echoes. Do they make us apprehensive to the next wave, real or imagined? Do they keep us in a constant state of fear? Do they nudge us to the source of all echoes?

May I point us to something ancient and wise about the echo of being fathomed by the unfathomable:

He has made everything beautiful in its time. He has also set eternity in the human heart; yet no one can fathom what God has done from beginning to end.

I know that there is nothing better for people than to be happy and to do good while they live.  That each of them may eat and drink, and find satisfaction in all their toil—this is the gift of God.

I know that everything God does will endure forever; nothing can be added to it and nothing taken from it. God does it so that people will fear him [be in radical amazement of him].

We are echo-located as it were by the One who fathoms us, though we are completely without facility to fathom His eternal nature. Whatever echoes we create or endure, we cannot fathom the One who made us for Himself.

May the a profound echo from this pandemic be the echo of God fathoming you, and you beginning to search his inscrutable ways. As Jesus invites:

Ask and it will be given to you, seek and you will find, knock and the door will be opened to you

1 thought on “Echoes from the Pandemic”