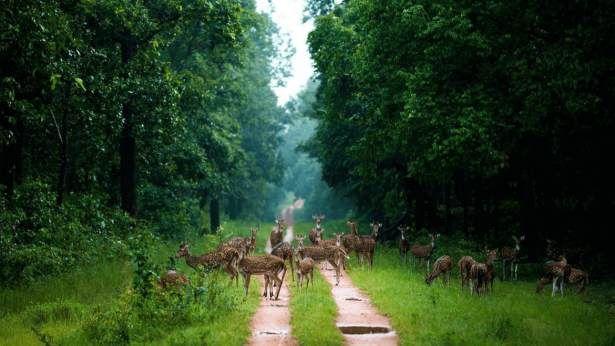 Have you ever walked along a path and come upon a herd of deer? There’s that first stillness when you are seen and evaluated for your safety quotient… and then they bolt into the woods! Have you lamented disturbing the sanctuary of their abode, or have you just been grateful for having seen the serene gathering?

In this month to explore the place violence in our times, I want to talk about our need for sanctuary because, as Quaker, Parker J. Palmer says,

We live in a culture of violence.

Even if we’re not at daily risk of physical injury or death… our culture relentlessly assaults our souls with noise, frenzy, consumerism, tribalism, homophobia, misogyny, racism, and more. It’s common to become desensitized to these assaults.

Parker J. Palmer, “On the Brink of Everything”

The Root of Inner Wisdom

The temptation is to become more frenzied, more activistic, more violent toward violence – even if we know violence begets violence. Thus a few years before he died, Thomas Merton spoke to this, as he was aware of his need for inner sanctuary:

There is a pervasive form of contemporary violence to which the idealist… most easily succumbs: activism and overwork. The rush and pressure of modern life are a form, perhaps the most common form, of its innate violence.

To allow oneself to be carried away by a multitude of conflicting concerns, to surrender to too many demands, to commit oneself to too many projects, to want to help everyone in everything is to succumb to violence. The frenzy of the activist neutralizes his work… it destroys the fruitfulness of his own work, because it kills the root of inner wisdom which makes work fruitful.

Caring for the root of inner wisdom becomes the work of those committed to being peacemakers in a time of violence, otherwise it can be too easy to slip into fighting fire with fire, addressing violence with violence, and forgetting how to be rooted to the Source of life.

I like the quip, “even Jesus did NOT have a messiah complex”. Though He is the Messiah, His example was not to succumb to the violence of trying to help everyone in everything. His actions, words, and prayer life demonstrated a rootedness to the One who made us for Himself.

In this light, Eugene Peterson writes,

Prayer is subversive activity. It involves a more or less open act of defiance against any claim of ultimacy by the current regime…

Prayer develops in us an awareness of God’s rule: his intentions, his ways, his strategies, his commands.

Eugene Peterson, “Where Your Treasure Is.”

9 thoughts on “Looking for Sanctuary in a Culture of Violence”