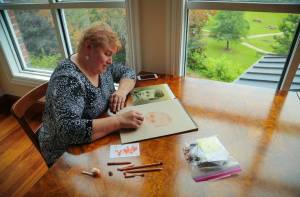 West Columbia’s Mary Burkett draws the sketches of children killed in the Holocaust so they won’t be forgotten. BY TIM DOMINICK

“Mary Burkett is an ordinary person called to extraordinary circumstances” begins the description of Mary Burkett Art. She is a wife, mother, and grandmother. She is Catholic with deep sympathy for children of the Holocaust. Without any artistic training she started drawing the portrait of little Hersch in January 2017:

No one could have been more surprised when he peeked out of the paper at me!

From there she began to search for more children in order to create a living memorial in her series “Beloved: Children of the Holocaust.” In Mary we are again confronted with an extraordinary ordinary life (Savouring an Ordinary Life). So unassuming and un-presumptuous, all she does is capture something of the mystery of our worth in her simple sketches.

Stories of the Mystery of our Worth

John Monk writes about her being invited to a Holocaust Remembrance Day at Columbia’s Tree of Life Synagogue where she set up a table. People dropped by to see her sketches still in her sketch book, and they were “amazed”.

“It wasn’t just the images. As she shows the pictures, Burkett flips through her sketch book, telling stories about the children, as much as she knows, gleaned from brief descriptions of the child on the Internet.

“Here is Little Edith,” she said of one girl who looks like she could take on the world, Edith Bartels, a Jewish Dutch girl in hiding from the Nazis. She was discovered in October 1944, and shipped to Auschwitz. She was 4.

Somebody thought she was absolutely worthless. That she was worth nothing, and people murdered her. Gosh, if that doesn’t make you stop and think about your own ethics and your own values and the value of human life, I don’t anything ever will.

Smoke under a Silent Sky

“Never shall I forget the small faces of the children whose bodies I saw transformed into smoke under a silent sky.”

The sentence from “Night,” by the late Elie Wiesel, the Nobel prize-winning writer who was in Auschwitz as a child, rings true for Burkett, who often recalls that line as she works. She is constantly amazed at the brutality of the executions of at least 6 million Jews and millions of others.

“The children who were deported to Auschwitz who were younger than 9 were literally taken from the train to the gas chamber. The Nazis called them ‘useless eaters,’ which means that they took up calories and didn’t do any work. So they killed them straightaway.”

God works in mysterious ways to reveal the enigma of our worth; and this worth says so much more about God than it says about us – but what can we do to understand such value other than to respond to His inviting love?

It is further amazing that He uses ordinary people to do extraordinary things. Elementary things such as simple sketches that drew the artist into a bigger story, and into the many stories of persons who were deemed unworthy. She could not abide with that.

In doing this she also draws us into the bigger story of the mystery of our worth as we explore the significance of others.

As the description of her book reads:

“In An Unexpected Year, Mary Burkett tells the incredible story of the creation of the Beloved portraits. You will walk with her, laugh with her, wonder with her – and see the hand of God at every step. This is a simple and beautiful story of God’s call and one woman’s answer.”

May we each hear God’s call and respond as beautifully as Mary.

2 thoughts on “Capturing Something of the Mystery of our Worth”