Being found out, Ethic of Disgust?, Mark 5:25-34, Out of Touch, Proximity Dress, Skin Hunger, The Spider Dress, The touch that touches back, The World out of Reach, Touch Aversion, Touch Deprivation 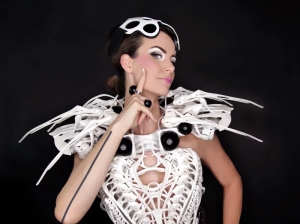 None of our senses has suffered from the COVID-19 pandemic as much as touch.

Thus begins Professor Manos Tsakiris essay on “The behavioural immune system protects us, but at what cost?” He continues:

“And although this touch deprivation has perhaps been most salient in relation to our separation from family and friends, many of us have also felt the loss of even mundane forms of touch – forms that might even be the foundation for social relations more broadly. We used to open the doors to our workplaces, touched by a hundred other hands every day, and hold them open for someone else without giving it a second thought. We used to shake hands with strangers before we got to know them. We used to pass everyday objects to each other through our hands. No more. Even as lockdowns begin to ease unevenly, we might still bump elbows, wave instead of hug, and obsessively disinfect our hands.”

Tsakiris says that “many of us literally lost touch with our friends and loved ones, and stopped touching strangers,” calling our experience during the pandemic as “an unplanned social experiment on skin hunger and touch aversion.” For some there is relief to “not to have to shake hands with colleagues, acquaintances and strangers, and might never wish to do so again.”  For others, it is the “fear of contamination and experience of touch-aversion” that keeps them likely to keep their distance beyond the pandemic. Tsakiris asks:

Could this experience of the world being out of reach, beyond our fingertips, have a corrosive effect on our social relations, even when the acute threat of COVID-19 has dissipated?

(Manos Tsakiris is professor of psychology at Royal Holloway University of London. His research investigates the neural and cognitive mechanisms of self-awareness and social cognition).

When Getting Too Close

Recently Kelly Dickens reported on “Fashion And Tech Join Forces To Create A Dress That Signals When People Get Too Close.” She interviewed Dutch fashion designer and engineer Anouk Wipprecht who has been working for 20 years on clothing that could respond with sensors to proximity. Wipprecht said her garments were only “analog” – that they were “not doing anything” – so she created one of her most notable designs aptly named “The Spider Dress” (the dress she is modelling, above).

“On the shoulders of the dress, there are long spider-like tentacles that move with the help of sensors. ‘It measures the intimate space, the personal space, the social space and the public space of the wearer,’ she explains…

When COVID hit, Wipprecht borrowed some of the aesthetic from her Spider creation and designed the “Proximity Dress,” which she hoped would help people better understand how to socially distance.”

I am not sure we needed more help or more excuses to be distant; we need help and excuses to get close, but there is the issue of disgust in getting too close to a person.

The Ethic of Disgust?

Tsakiris refers to philosopher Martha Nussbaum who has argued that disgust is related to “a human tendency to deny and reject our status as mortal, fleshly beings.”

“In The Monarchy of Fear (2019), she notes that disgust ‘is motivated by anxiety about animality and mortality, and triggered, therefore, by bodily characteristics, real or imputed, that bear a close relationship to our anxieties about mortality and the vulnerable animal body.’ In practical terms, disgust is an aversion to contact, driven by a fear of contamination. Our hands and mouths are the gatekeepers, the charged body parts whose activities can keep us safe or imperil us. But beyond disgust for primary contaminants such as blood or rotten food, we’re also capable of a wider sense of disgust, shaped by social forces, that extends to groups, objects or situations that bear no reliable connection with real risk of infection.” 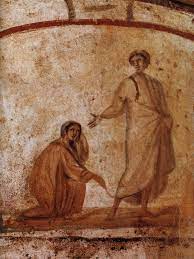 One of the oldest depictions of Christian art found in Roman catacombs: woman who touches Jesus’ garment is healed and is searched for by Jesus.

We see this reaction of disgust in Old Testament quarantine laws in relation of skin diseases like leprosy, or anything to do with blood, as in the case of the woman with a “bleeding disorder” (depicted here; encounter found in Mark 5).

It is a story of touch, of making contact, of faith in action. The woman with a “bleeding disorder” for 12 years would not have been allowed in public and certainly not allowed to be near anyone close enough to touch. This touching would be interpreted as making the person touched ceremonially “unclean”.  But she believes that if only she could touch the hem of Jesus’ garment, she would be healed.

The Touch that Touches Back

And so it was. And then a most wonderful thing happens. Jesus knows someone has touched Him in a way that was not the bumping of a jostling crowd; it was the touch that touches back, and He wants to know the person who touched Him. Knowing she has broken quarantine laws, she now wants to hide in fear. It is the paradoxical moment that connects being healed from 12 years of this shameful physical and social disease, and of being found out. Mark 5:33 reads:

Then the woman, knowing what had happened to her, came and fell at his feet and, trembling with fear, told him the whole truth. He said to her, ‘Daughter, your faith has healed you. Go in peace and be freed from your suffering.’

Can you imagine not being touched with normal human contact, care, or intimacy for 12 years? Can you imagine an endless quarantine? Jesus did more than free this woman from her physical suffering, He freed her from a perpetual quarantine that did not seem to have an end. He freed her to relate to her neighbours, to shop in her market, to be a person in her community.

As Tsakiris said, “None of our senses has suffered from the COVID-19 pandemic as much as touch.” People hunger to touch and to be touched. We need it for proper physical, emotional, and psychological health. We need to be in touch for we were made for relationship.

For more on our need for relationship with each other and with the One who made us for Himself, see “Being as Communion.”