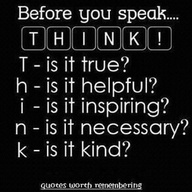 Would it be so bad if there was more silence in the world; if this little acrostic was a law that governed how we speak? Roll your eyes all you want at the Sunday School platitude, but consider what malicious speech is doing to us now.

If corrupt speech is language that disintegrates its hearers and its speaker, the opposite might be characterized as integrating its hearers and speakers toward wholeness. There is something about wholesome speech that is life-giving. The Proverbs are full of aphorisms that speak to this:

Proverbs 12:6  The words of the wicked lie in wait for blood, but the speech of the upright rescues them.

Proverbs 12:18  The words of the reckless pierce like swords, but the tongue of the wise brings healing.

Proverbs 15:4  Wholesome speech is a tree of life, but dishonest talk breaks the spirit.

Proverbs 16:21  The wise in heart are called discerning, and gracious words promote instruction.

Proverbs 16:24  Gracious words are a honeycomb, sweet to the soul and healing to the bones.

One doesn’t have to be a person of faith to recognize the wisdom of these proverbs.  Whether it’s the problem of social media’s anonymity as a platform spewing bullying messages, or the ubiquity of some contemporary hip hop lyrics that express misogynistic anger, or the insistence of Charlie Hebdo’s right to insult – it becomes a bit much to bear the constant barrage of disintegrating speech. And make no mistake about it: unwholesome speech is a disintegrating force injurious to clear thinking, relationships, and the soul.

This is not a modern problem, though all our medias allow the problem to be immediate and constant. When the Apostle Paul wrote to the Ephesian Church two millennia ago, he spoke to the issue then:

Let no unwholesome word proceed from your mouth, but only such a word as is good for edification according to the need of the moment, so that it will give grace to those who hear.

Do not grieve the Holy Spirit of God, by whom you were sealed for the day of redemption. Let all bitterness and wrath and anger and clamor and slander be put away from you, along with all malice. Be kind to one another, tender-hearted, forgiving each other, just as God in Christ also has forgiven you.  (Ephesians 2:29-32)

Unwholesome speech is described as unedifying: it does not build up – it tears down. Though Ecclesiastes tells us there is “a time to tear down and a time to build up,” it takes wisdom to recognize the time and the means of tearing down. Unwholesome speech is merely a fire out of control.

If you are a spiritual person, unwholesome speech grieves the Holy Spirit. In other words, it is grievous to your relationship with God and to your spirituality.

Bitterness: an acid that destroys its own container, and is the continual drip of resentment that burns its listeners. It is speech that breeds ungratefulness, and gives vent to the rest of the list:

Wrath: the fermenting of unchecked outbursts of anger – about which the angry person feels totally justified.

Anger: the sense of self-justified revenge, the planning of vengence.

Clamour: the crying out, and the screaming for attention; it is the kingdom of noise that The Screwtape Letters describes.

Evil speaking:  or “blasphemeo” – from which we get that old English word, “blasphemy” – is the speech of slander and defamation.

Malice: ill will, or maliciousness and intentional degrading of others.

Who has either the wisdom or power to control such corruptive tendencies? The Apostle James says “the tongue… is a fire… it sets the whole course of one’s life on fire…”  By contrast, we are pointed to the elements of wholesome speech – and to its motivation and inspiration.

Be kind to one another, tender-hearted, forgiving each other, just as God in Christ also has forgiven you

Kindness: My favourite nick-name for Jesus is found in Titus 3:4 where He is described as “the kindness and love of God.”  Surely there is a play on words, since kindness in the Greek is “chrestos“, and Jesus is called “Christos” – from which we get the word Christ. Kindness is fitting to the need, it is the genuine goodness of a person that is present when necessary.

Tenderhearted: is translated “compassionate” in other passages, and speaks to the inner motivation of pure affection. In English, this is a word picture of a heart that is sensitive to others.

Finally forgiveness: comes from the word “charisomai” – who’s root word is “charis” – or grace. Forgiveness is to “give freely – to give graciously; it is a willingness to remit a person’s debt.

Who on Earth can do any of this?  Even the Apostle points to Jesus Himself when he writes that we “forgive just as God in Christ has forgiven you.”

For an excellent spiritual exercise, go to the  30 days of Wholesome Speech Devotional.