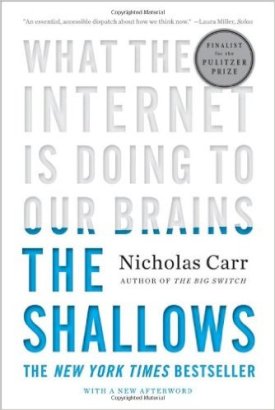 In the metaphor of depth, Nicholas Carr comments on our cultural wading in the The Shallows: What the Internet is Doing to our Brains. He speaks, not as a Luddite or techno-neophite (that is, not as I), but as a longtime computer enthusiast who takes care to distinguish between the beneficial & detrimental aspects of the Internet. Here are some of the major distinguishing points:

“Who but a curmudgeon would claim that the most vital and transformative technology of our time might have a dark side? Especially at a time when leading edge educators are working furiously to bring their field up to date by incorporating the best of the latest technology in a way that improves education. Against this background Carr’s book seems reminiscent of those poor backward folks who opposed the printing press. As the brilliant and funny curmudgeon Neil Postman once said about himself, Carr is indeed playing the role of the Luddite in some ways. Still, neither Postman nor Carr were trying to dismantle the Internet or just shriek an alarm with their work. They are trying to help us understand something important.” Todd I. Stark

There is no use turning back the hands of time (sorry for the non-digitial metaphor). The writer of Ecclesiastes (one of the oldest dated books in the Bible) sagely puts it this way:

Do not ask, ‘Why were the old days were better than these?’… it’s just not wise.

Nostalgia can creep in with distorted memories of what was idealized – snapshotted fragments that form more of a feeling of what things were like, than the substance of what actually was. Thus births the curmudgeon.

Folk have been trying to speak to modernity’s techno-love affair, from artists like James Taylor, to mere mortals running hard just to stay behind; we have this vague sense that we are losing something in the windfall of gaining so much.

“Some aspects of life — often the most meaningful & rewarding aspects — require time & depth. Yet the digital world constantly makes us break it into discrete, interchangeable bits that hurtle us forward so rapidly & inexorably that we simply don’t have time to stop & think. And before we know it, we’re unwilling & even unable to think. Not in any way that allows true self-awareness in any real context.

Emerson once said (as aptly quoted by Carr), “Things are in the saddle / And ride mankind.” The danger is that we’ll not only willingly, even eagerly, wear those saddles, but that we’ll come to desire them & buckle them on ever more tightly, until we feel naked without them. And we’ll gladly pay anything to keep them there, even as we lose the capacity to wonder why we ever put them on in the first place.” William Timothy Lukeman 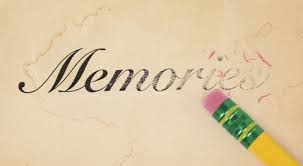 Memories might be snapshots of the past, but we live in the time of the self-erasing snapchat, and the right to be forgotten. What happens to us as we remain in the shallows and entertain fragmented – even shattered thinking (as James Taylor suggests)?  More and more will articles like mine be read less and less – as many have already lamented how “demanding” they are. They will be artifacts of the 20th Century found in the early 21st.

Nevertheless, depth is what we are made for as the Creator God sonars whatever distance there is to our complicated and labyrinth-like lives. And we are glad to be found, to be found out, to be revealed and known and loved. As the writer of Ecclesiastes recognized so long ago:

He has set eternity in the human heart; yet no one can fathom what God has done from beginning to end.

He fathoms us, shallow or deep, and it all remains more enigma than dogma.

2 thoughts on “Time and Timelessness: The Shallows”