Canadian Parliament Shooting, Kevin Vickers, Loneliest Moment of my Life, Loneliness, Pray for Michael, Protecting Democracy, Respect for the dignity of the person, Sergeant-at-Arms, Your own October 22 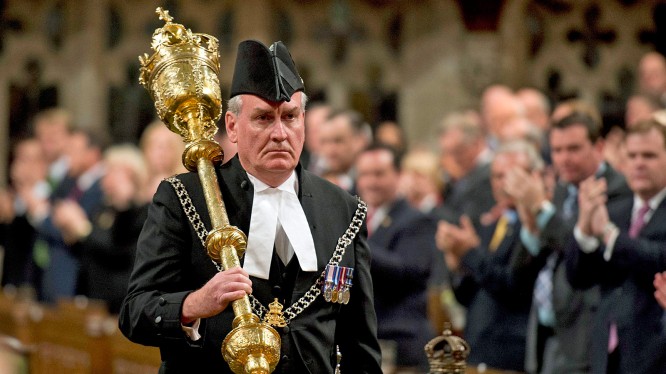 It has been a year since Kevin Vickers shot a gunman in the Parliament hallways. The photo above is illustrative of something that should be noted: the rare focus on a man of integrity in the midst of a blurred background of people known as the “honourable members of parliament.”  Indeed, there was at least one confirmed to be on that day.

“He was largely seen by the public,” writes Adrian Humphreys, “only as a ceremonial fixture in the arcane traditions of Parliament, wearing an archaic hat and carrying the ceremonial mace into the House of Commons before each sitting.

‘My career as sergeant-at-arms went by very quickly and then on Oct. 22 came that day, that tragic day,’ he said, his voice betraying emotion.”

But “the morning after his daring heroics — diving from behind a pillar inside the House of Commons to shoot dead a gunman who had just killed a soldier — Parliament’s sergeant-at-arms Kevin Vickers awoke before dawn and wept.” He said,

It was the loneliest moment of my life.

Though Vickers was an RCMP Officer for 29 years, his career was not marked by television-glorified shootings.

“’One of the things that struck me during my career is I obtained 17 confessions from men who’ve killed people’ (Vickers told graduates and faculty during Convocation at Mount Allison University where he received an Honorary Doctor of Law Degree).

‘The reason that I was able to get those confessions and facilitate those men telling me their stories was what my father, Bill Vickers, instilled in me way back when: regardless how repulsive the crime, you always respect the dignity of their person.'”

It kind of occurred to me that God, after he was crucified, the first person he let into the kingdom of heaven was the man crucified next to him, a convicted criminal.

So with my grandchildren in my arms I said a prayer for Michael (the gunman).

It was an important part of his own reconciliation with killing a man, and it connected him to what it meant to respect the dignity of the person. Vickers had carried out a hard thing that had to be done, but not to be glorified.

In Posture of a New Age, I touched on James M. Houston’s Continent of Loneliness, and Henri Nouwen’s insight on solitude and loneliness. Each noted with wisdom the place of community that surrounds, comforts, and sometimes can only offer silent presence. It was a gift of grace for Kevin Vickers to know his own need for a community of faith and love in a moment of deep loneliness. Do you know what you would have done with such a moment?

Facing the test of your own October 22

In his convocation address, Vickers predicted, with the realism of experience, that each one of us will face our own “October 22” moment. He honoured the place of his mother, family, and priest at that moment, and he called all of them to himself for prayer.

Some have no-one to call, and many have forgotten the practice of prayer.

At this stage of my life, prayer has moved from saying prayers, to being in prayer more as a way of life. That can sound more holy or accomplished than I want.  Nevertheless what I want to say without shame or pride, is how all of life becomes a prayer when you know the One who made you for Himself – when you know your innate relationally with God.

3 thoughts on ““The Loneliest Moment of My Life””