All Hallows' Eve, All Saints Day, Caitlyn Jenner Costume, God meets us where we are and as we are, Half-dressed Priests & Nuns, Halloween, Halloween Arsons, Massive Identity Confusion, No Pretending, Pluralistic Society, Reduced to a Charicature, Saint, Transphobic Costume? 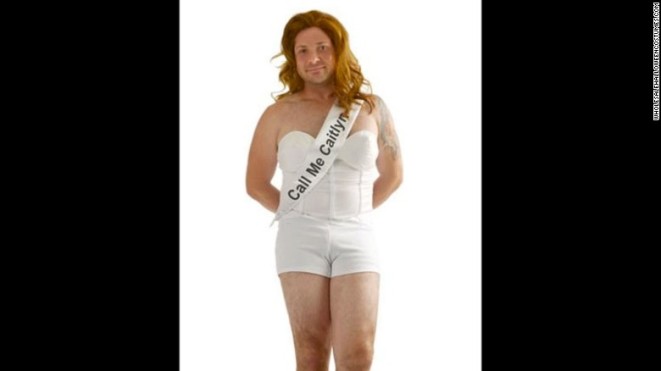 In late August, Emanuella Grinberg of CNN wrote about the above noted costume going on sale in September in time for Halloween:

“Critics say the costume mocks the transgender community and promotes transphobia by reducing Jenner to a stereotype. An online petition singles out pop-up store Spirit Halloween’s version, which includes a white corset and a wig. The petition urges the retailer to stop selling it:

‘Do not turn Caitlyn Jenner into a costume. Your profit will only lead to greater transphobia and marginalization of an already at-risk community,’ the petition says.”

The retailer has no intention of pulling the costume, as spokeswoman Lisa Barr stated in an email:

“At Spirit Halloween we create a wide range of costumes that are often based on celebrities, public figures, heroes and superheroes. Caitlyn Jenner is all of the above and our Caitlyn-inspired costume reflects just that.”

Though it might be possible in a limited context to don the costume in a tasteful way, that’s not likely to happen, for as transgender advocates say, “the costume reduces Jenner to a caricature.”

“Jenner’s inclusion in such company [of humorous and tongue-in-cheek costumes] is a clear mockery,” said Kris Hayashi, executive director of the Transgender Law Center.

“We’re in a moment of ongoing violence and crisis in the community,” he said. “It’s a real affront to the community to think you can make fun of transgender people and go to a party dressed like Caitlyn when we’re struggling to survive on a daily basis.”

The person who reduced herself to a transgender identity is further reduced to a caricature, a stereotype, and a costume. I have a great deal of empathy for people on the slide toward reductionism; we were never meant for such diminishment.

The Caitlyn Jenner costume might have been greeted with the same flamboyance of any other costume in the transgender community – as a kind of homage to normalizing the strangeness of strange identities – but there is little sense of humour about this – because, as they say:

“We’re in a moment of Violence and Crisis”

Kris Hayashi of the Transgender Law Centre need not have added “in the [transgender] community” to the “moment of violence and crisis” – because the statement stands on its own for all of us. Violence and the massive identity crisis is not unique to the transgender community, though I lament that the Transgender community feel particularly vulnerable whenever someone is attacked for no other reason than being mistaken for their mistaken identity. I don’t understand that trigger for violence nor most other reasons for violence.

For the record: I do not condone violence or disrespect against anyone in the LGBTQ communities (or anyone else, for that matter), and I have actively stood against this in my various spheres of influence. That I disagree with the philosophical basis for what I am clearly calling “confused basis for identity” should not be mistaken for “phobic” or hate speech. I am challenging the notion of “identity” in popular culture.

And further, for the record: I do not advocate anyone get this costume. I wasn’t likely to get this, or any other costume, because I don’t “celebrate” Halloween with its tilt to all things evil, sensual, and in this case, disrespectul. I don’t castigate those who do make a big deal about the day, and when children come by my house as little monsters, I have candies ready to give. But on the whole, aside from this, Halloween’s arsons, vandalism, and drunkenness is a wicked cocktail betraying our worst natures.

Besides, it is likely there will be far more people half-dressed as priests and nuns than Caitlyns this Halloween. Such is life in a pluralistic society.

Just in time for Halloween: “All Saint’s Day”

Halloween, or “All Hallows’ Eve” – or “The eve of Holy ones” is followed by November 1, known in the “church calendar” as All Saints’ Day – or All Hallows’ (Holy Ones) Day. “The idea for All Saints’ Day goes back to the fourth century when early Christians kept a festival on the first Sunday after Pentecost (in late May or early June) in honor of all martyrs and saints. Other sources say that a commemoration of “All Martyrs” began to be celebrated as early as 270 CE but no specific month or date is recorded. Pope Gregory IV made All Saints’ Day an authorized holiday in 837 CE. It is speculated that the chosen date for the event, November 1, may have been an attempt to supplant the pagan Festival of the Dead (also known as Samhain or the feast of Saman, lord of death). All Saints’ Day… was first instituted at the monastery in Cluny in 993 CE and quickly spread among Christians.”

Who is a saint?

Regrettable, there are sections of the Church that may give the impression that the “Saintly” designation is rather unreachable by a “mere Christian,” as C.S. Lewis would put it. Some may mistakenly think “saint” is a religious super star, but the word saint in the Bible simply means to be holy, or to be set apart for God. A saint is a person who is “into” following God, walking with Him, and living for Him. You can’t be a saint without God initiating into your life, and living through you by His Holy Spirit – no matter how hard you try to lead a good life, or how hard you try to be a good person apart from Him.

Yes, dear readers… much, much more enigma than dogma.

4 thoughts on “And just in time for Halloween”