As we contemplate New Years, I want to recount a “story” that ran last year around this time. It’s all a little silly but British astronomer Patrick Moore predicted that the (non)planet Pluto would pass behind Jupiter creating a planetary alignment with the combined “gravitational pull of the two planets, thus counteracting the Earth’s gravity and briefly rendering people weightless.”

According to a website with a very official looking tweet from NASA, “anyone who jumped up in the air at 9:47 a.m. Pacific Standard Time (January 4, 2015) wouldn’t come back down for three seconds (Moore called this the Jovian-Plutonian gravitational effect).”

That’s the magic of the Internet… ‘The Internet, for all it does to spread such silly rumours, also makes it really easy to find out the rumors are silly.'”

Hoax or silly rumours at play, in general we appear to be creatures who try to defy the laws of physics, cheat death, and disregard justice/ethics.

Consider the story about students who not only defy ethics, but who also consider cheating their right! Craig Jeffrey reported for BBC Magazine from Uttar Pradesh, India:

“Students are often keen to exercise their rights but recently there has been an interesting twist – some in India are talking about their right to cheat in university exams.

“It is our democratic right!” a thin, addled-looking man named Pratap Singh once said to me as he stood, chai in hand, outside his university in the northern state of Uttar Pradesh. “Cheating is our birthright.”

Corruption in the university exam system is common in this part of India. The rich can bribe their way to examination success… So if those with money or political influence can cheat, poorer students ask, why shouldn’t they?

“India’s university system is in crisis,” [Singh said]. “Cheating happens at every level. Students bribe to get admission and good results. Research students get professors to write their dissertations. And the professors cheat too, publishing articles in bogus journals.”

India is not alone, it’s just appears to be unashamedly open about it.

Consider Russia being suspended from international athletics over doping, and compelled to reform in order to return for the Olympics.

“In Russia, the doping issue is acute, we can’t deny it,” said Ramil Khabriev, the former director general of Russia’s anti doping agency.

He added: “We have the most violations in anti-doping rules in comparison with other countries.

“This, of course, shows there’s a serious problem. Around 40% of these violations are from youth sports, which is alarming.”

Corruption is Inherently Corrupting: Oxidation of the Soul

Consider this brief review of sites about publishing false findings.

Consider sites like Snopes.com, or Hoaxtead Research devoted to sniff out false stories and charity scams (how low can a person go?). 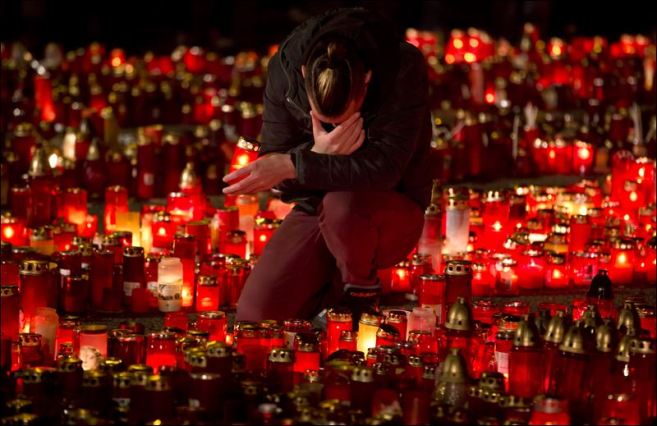 Associated Press. Grief in response to Corruption that led to Bucharest Nightclub Fire.

Or consider the corruption integral to the tragic nightclub fire in Romania:

“Anger at the government has been growing, with many perceiving it as being corrupt, and [the nightclub] fire delivered the final blow…

Witnesses said the fire broke out during a heavy metal concert in the basement club when a spark ignited foam decor, sending people stampeding for the single-door exit. The death toll stands at 32, while 130 remain in hospital, dozens in a serious or critical condition.

[Prime Minister Victor] Ponta… was indicted in July as part of a wide-ranging corruption investigation and had his assets seized. The charges against Ponta include tax evasion, money laundering, conflict of interest and making false statements while he was working as a lawyer in 2007 and 2008. He was also a politician at the time.”

Thus the fire has become a larger symbol of the conditions that led to the licence to be issued, the pyrotechnics to be condoned, in a basement nightclub with one exit and no fire extinguishers (how many were paid off to look the other way?). Corruption erodes trust in structures designed to create safety.

Anti-Gravity Day!? More like we’re in an anti-gravitas era.

Gravitas “may be translated variously as weight, seriousness and dignity, also importance; and connotes a certain substance or depth of personality.”

Though passage from one year to the next is arbitrary, the dignity and depth of personality of Gravitas is not. If you were to do a quick search for “gravitas,” you would likely come up with management advice spots like this. But these kinds of articles speak to techniques, and miss the point of what it means to be a person of character.

In contrast Michael Josephson gives this pithy explanation on what it means to be a Person of Character. Among the points he makes, let me highlight this one:

A person of character believes in the inherent dignity of all people and treats everyone with respect, even those whose ideas and ideologies evoke strong disagreement.

Being a Person of Character & Inherent Dignity

The ancient Proverbs are forthright about unfair weights and measures that undermines society. How many Enron Scandals and Romanian nightclub fires do we need in order to see that? The prophet Isaiah gives this warning:

Woe to the sinful nation,
a people whose guilt is great,
a brood of evildoers,
children given to corruption!

In contrast, becoming a person of character builds in strength and fortifies the structures of trust. How long can any system hold up under anti-gravity day-like corruption, and think the fruits will be fair – or the outcomes be accepted without revolution?

May this be a year in which you grow in gravitas and character.

May the real you show up and stand up when desperately needed.

May you recognize your inherent dignity as a person created by the One who made you for Himself so that you may be able to make other souls feel their worth.

And… may this be a year you gain more enigma than dogma!

1 thought on “Anti-Gravity Day and the Loss of Character”