#NotaSkittle, A fine bowl of sweeties, Be a good neighbour, Diasporas, Donald Trump Jr., Human Spillage and Hospitality, Live like a neighbour, Not a Skittle, Refugees aren't Skittles, Syrian Refugees, The end you live for, The immigrant experience, Vocation of being a neighbour 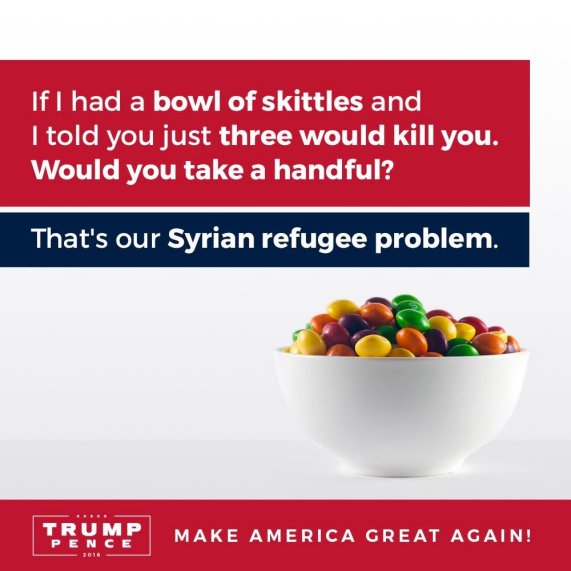 Where do I start?

When Donald Trump Jr. used a bowl of Skittles to make a point about the potential that there may be some terrorists among them, he triggered a swift response to this reductionistic analogy.

I suppose if both Donald Jr. and Skittles had been around when my family had migrated to Canada from post war Germany, this same analogy could’ve been used for me and my family.  In fact this could’ve been used for the diasporas of the Irish, Polish, Jewish, Vietnamese, Chinese, Punjabi, South Indian… you get the point. If this actually applies to Syrians today, it applies to us in our nation’s yesterdays.

But the analogy is pointless (read Aaron Blake’s article in the Washington Post). In every people group there are “bad skittles” (with apologies to the Skittles company), including among our own born-in-Canada citizens. But more to the point, to reduce people to this simplistic analysis as a bowl of candy potentially possessing a few poison ones, is to turn it on every person who has ever migrated into the country.

This only makes sense if you forget your own immigrant status or experience.

I can tell you that Germans were not particularly trusted after WWII, and to aggravate things further, my family managed to land in a Canadian military town no less! People didn’t have to have long memories to fuel their suspicions; their loss of fathers and brothers was the current experience of their lives. Surely it had to be asked then – “why were we let in?”

Nevertheless, after each wave of foreign immigrant manages to make a new life for themselves and positively contribute to this amazing country (as invariably they do), we happily forget the ways they were mistreated.

Don’t forget why we got involved

Sadly, this bowl of candy analogy forgets why we implicated ourselves in welcoming refugees in the first place. It was last September that the world gasped at the image of three year old Aylan Kurdi laying lonely on a Turkish shore. It triggered moral outrage, and stirred us from any apathetic non-response to distant refugees. It provoked my article on “Human Spillage and Hospitality” as an encouragement to live like a neighbour. 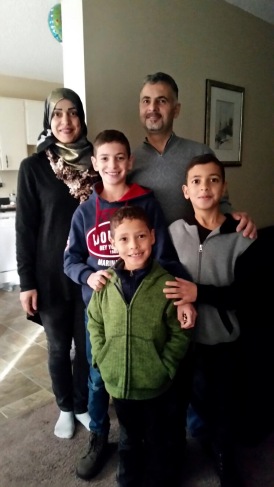 Meet the family our Church sponsored.

They arrived this summer.

They would prefer to live in their home city, where Ali had a successful auto paint business before it was bombed and he was injured; it was where all their relatives and friends once lived. They would say, as we often do: “there’s no place like home.”

They are persons whom we have come to know and befriend.

They are young, exuberant – ready to learn and succeed. Ready to give and receive.

What can be done about some bad candies?

Forgive the mixed metaphor of Skittles and M&Ms: My immigrant friends and I.

Perhaps the better response to the fear that there might be three poison candies in a bowl of Skittles – is to refine/improve the process of finding the actual three poison ones.

Otherwise, like me and all (that should read ALL) the immigrants I grew up with and know – we are a perfectly fine bowl of sweeties.

The response to fear ought not to be blanket rejection; it ought to set off your search for what your faith is in. What you trust will make all the difference in how you approach your vocation of being a neighbour.

Meanwhile – If you want to Make any nation Great Again…

… try being a good neighbour…