Attempt at Explanation, First past the post, Human Rights, Human Rights and Human Dignity, No moral authority?, Self-referenced ethics, The Loss of Worth, Thoughts on War and Peace 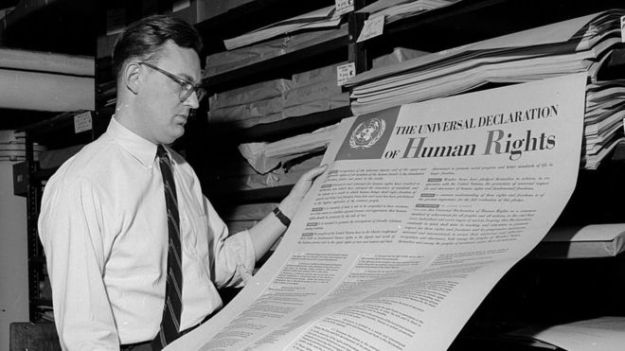 With an increasing number of states seemingly reluctant to honour human rights treaties, Imogen Foulkes of BBC News, Geneva asks “is there a future for this type of international agreement?”

“With these words, Eleanor Roosevelt presented the Universal Declaration of Human Rights to the United Nations. It was 1948 and UN member states, determined to prevent a repeat of the horrors of World War Two, were filled with idealism and aspiration.”

[Most of what follows is from Ms. Foulkes’ article]

“The universal declaration promised (among other things) the right to life, the right not to be tortured, and the right to seek asylum from persecution. The declaration was followed just one year later by the adoption of the Geneva Conventions, designed to protect civilians in war, and to guarantee the right of medical staff in war zones to work freely.

In the decades since 1948 many of the principles have been enshrined in international law, with the 1951 convention on refugees, and the absolute prohibition on torture. Mrs Roosevelt’s prophecy that the declaration would become “the international magna carta of all men everywhere” appeared to have been fulfilled.

But fast forward almost 70 years, and the ideals of the 1940s are starting to look a little threadbare. Faced with hundreds of thousands of migrants and asylum seekers at their borders, many European nations appear reluctant to honour their obligations to offer asylum. Instead, their efforts, from Hungary’s fence to the UK’s debate over accepting a few dozen juvenile Afghan asylum seekers, seem focused on keeping people out.”

An Attempt at Explanation

Peggy Hicks, a director at the UN Human Rights Office attempts an explanation as to why attitudes to human rights may be changing.

“When confronted with the evil we see in the world today, it doesn’t surprise me that those who might not have thought very deeply about this [torture] might have a visceral idea that this might be a good idea.”

But across Europe and the United States, traditional opinion leaders, from politicians to UN officials, have been accused of being out of touch and elitist. Suggesting that some people just haven’t thought deeply enough about torture to understand that it is wrong, could be part of the problem.

“We are looking for the sustaining of basic guarantees of protection and assistance for people affected by conflict.”

Dr Aloudat is concerned that changing attitudes, in particular towards medical staff working in war zones, will undermine those basic guarantees. He was recently asked why MSF staff do not distinguish between wounded who are civilians, and those who might be fighters, who, if treated, would simply return to the battlefield.

“This is absurd, anyone without a gun deserves to be treated… We have no moral authority to judge their intentions in the future.”

Extending the analogy, he suggested that doctors or aid workers could end up being asked not to treat, or feed, children, in case they grew up to be fighters.

“It’s an illegal, unethical and immoral view of the world,” he says.

Dr. Aloudat says more than he intends when he confesses “we have no moral authority,” since it is the loss of transcendent morality that got us to this point. The lack of moral authority comes with the lack of discernment too. He refuses to discern the likelihood of combatants intentions in the future, and thus patches them up to be released back into battle. He is naive to ignore what can be done to treat the patient and restrict the violence, while somehow pronouncing, to do otherwise is to have “an illegal, unethical and immoral view of the world.”

What other view can one have without transcendence, than to have one’s ethics totally self referenced? Without knowing it, Dr. Aloudat commits the same philosophical error as those whom he accuses: his own ethics are self-referenced – for he has no moral authority than himself.  He laments:

“Accepting torture, or deprivation, or siege, or war crimes as inevitable, or ok if they get things done faster is horrifying, and I wouldn’t want to be in a world where that’s the norm.”

[I speak to this very notion in “Thoughts on War and Peace.”]

What kind of world do you want to live in? We are getting the world we have been ruining since the fall; we are in an angry age where violence begets violence; a world whose ecosystems appear to be gasping their last breathes.

An Alternative Explanation: The Loss of Worth

I submit that the post human rights world coincides with this increasingly post-Christian era; the substance of personal worth, personhood, and human rights does not arrive self subscribed – it is imbued by the One who made us for Himself. Without transcendence, humans merely argue about who has worth and who doesn’t; who is in and who shall be left out.

In Christ, “the soul finds its worth.” When we know it, we are able to recognize this in others, foster it, protect it, and enrich the worthiness of others. As Leonard Cohen wrote in his Book of Mercy,