A Peaceable Christ, A peaceable church, Edward Knippers, Emulate Jesus' model, Forgiveness, In the face of Persecution and Terror, Incarnate, Jesus model to be emulated, Shalom of the Soul, Terror?, The Peace of Christ, The place of violence in our times, The Sacrifice, Violence conquered nonviolently 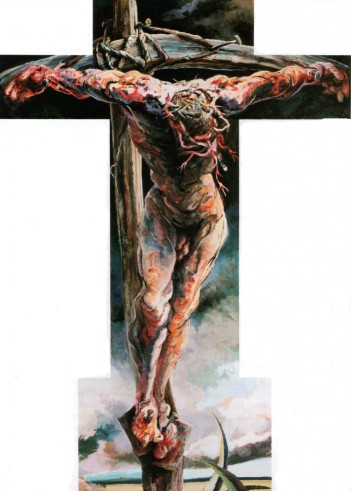 The place of violence in our times requires us to remember:

Remember that in the face of persecution and terror, Jesus forgave his torturers.

“At the heart of Edward Knippers’ theology and art is the Incarnation. He views the Incarnation as proof that the body is the meeting of heaven and earth. The body of Christ in  all its brokenness is essential because without it, Knippers contends, Christ’s sacrifice would not be complete. Without the broken body of Jesus there can be no redemptive resurrection.”

In the midst of Remembrance Day commemorations, I urge you to remember the embodied incarnation of God in man – Jesus – who is the model of forgiveness in the face of torture & mockery… persecution & terror:

Jesus responds to the crucifixion and the mockery with the powerfully haunting words, ‘Father, forgive them, for they know not what they do.’ These compelling, convicting words communicate God’s indescribable love for his creation.

Even in the midst of torture and mockery, Jesus extends forgiveness to his tormentors and embodies his earlier teaching on loving one’s enemies (Luke 6:27-36).

Jesus’s words also foreshadow the forgiveness through faith in him that would soon be proclaimed throughout the entire know world, fulfilling the words of Isaiah 53:12 (‘Yet he bore the sin of many and makes intercession for the transgressor’) and serving as a model for Christians to emulate as they have faced persecution and martyrdom through the centuries.

From “The Final Days of Jesus“, by Andreas Kostenberger & Justin Taylor.

A Peaceable Christ in a hostile world

In these unfriendly times, it is never more true to understand the good news of Christ as the Prince of Peace for the shalom of the soul. In their book, “A Peaceable Psychology,” Drs. Dueck and Reimer write:

The good news is that the powers of evil are conquered nonviolently by the resurrection, the ascension, and the continued presence of a peaceable church in a hostile world.

“These are the days of Miracle and Wonder“

These are the days violence & terror; of evasion & ignorance; of self-protection &  pre-emptive strikes – but today “let the peace of Christ rule in your hearts, since as members of one body you were called to peace. And be thankful.”

1 thought on “In the Face of Persecution and Terror”