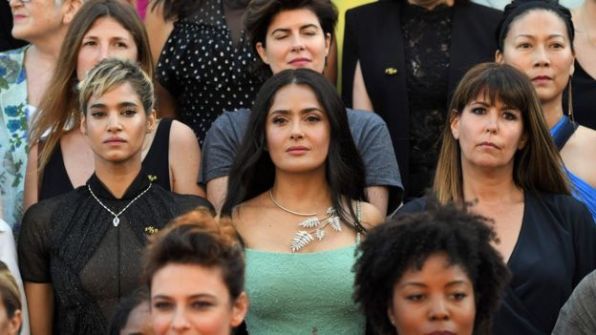 It was at the Cannes Film Festival this spring that 82 women marched in what was termed “the red carpet protest.” Two time Oscar winning Cate Blanchett said:

Thank you entertainment industry for being the last to join the world to promote pay equity between genders, and to work toward equal pay for equal work. What took you so long?

Another Implication of #TimesUp

Salma Hayek in particular was vocal about what she sees as the pay inequality in her [hyper-inflated] industry, saying:

Time’s up. You [men] had a good run but it is time now to be generous with the actresses.

Neil Smith of the BBC reported:

“Hayek said inflated fees demanded by some leading actors, whom she did not name, could mean there was less money left for their female co-stars… “it is not just the producers” who have to change if the huge pay gap is to be closed. “It is actors too.”

“Unless they made sacrifices”, she said, “it is going to be hard for equality”.

Prepared to live by the same ethic?

It is with remarkable audacity that the entitled and overpaid entertainers of our day can cast a glance at those being paid even more than they – giving highly publicized lip service to equality – without a single ounce of awareness of their own responsibility to live by the same ethic.

The movie stars and the media that covered them didn’t appear to recognize their privilege even though their action was called the red carpet protest – because – what other carpet would this group condescend to march upon? Surely not down your street, your ally, or the hallway of your workplace. Can this sincerely be called a “protest”? It would have been more accurate to call this just another photo op for the rich.

Hayek’s comment may go unchallenged among the politically correct because, after all, they honestly believe in pay equity… until it is applied to them. After the first awards show of 2018 (The Golden Globe Awards), I wrote this in “From the Sexual Revolution to the Sexual Revolt“:

The very epicentre of the sexual revolution is now convulsing with its own sexual revolt.  Meanwhile Hollywood continues to churn out hyper-sexualized movies & media, resist pay equity, harbour hipster racial discrimination, and theatrically create the illusion that #timesup for sexual abusers, while only recently wanting society to be less sexually invasive.

Is the irony lost only on this industry as they celebrate one self-congratulatory awards ceremony after another?

Who can argue for pay inequity? It is unfair, and no one can argue for inequality in good faith. However it is incredulous that these entertainers are out of touch with living by the same principles for the sake of their fans.

Hayek may as well have said:

Unless [we] make sacrifices, it is going to be hard for equality.

What is your insight?