Hammer looking for a nail, Have a hammer?, Prince of Peace?, The Chronicles of Narnia, WWJB, WWJD, WWJS 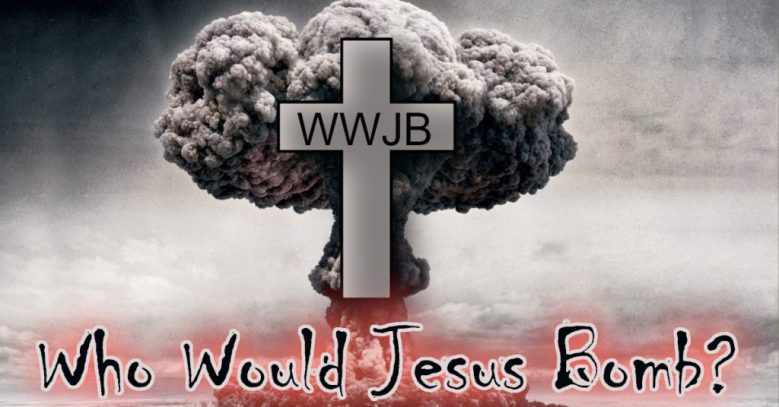 Years ago when the whole WWJD craze made “What Would Jesus Do?” a trite answer to any question of ethics, my good atheist neighbour had this bumper sticker on his car (above).

I had to dejectedly bow my head in shared disgust that the polluted river of militarism had overflowed the banks of the modern western church to wash away the good news of the Prince of Peace and replace it with the bad news of accepted violence.

For a timely read, see Nathaniel Manderson’s article where he writes: “My fellow evangelicals claim they’re fighting to keep Christ in Christmas. But they’ve been ignoring him for years.”

WWJS: What Would Jesus Shoot?

It’s not unusual to receive Christmas cards of family photos with smiling faces and good wishes, but this Christmas exposes a troubling trend that confounds the whole meaning of Christmas: 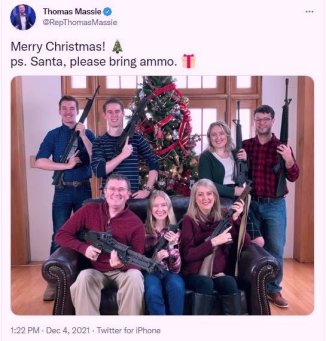 Here is American Rep. Thomas Massie’s idea of a family Christmas card. One journalist wrote: “The deranged Christmas photo comes just days after Ethan Crumbley, a 15-year-old student at Oxford High School in Michigan, opened fire on his classmates with the same gun his father had purchased days before on Black Friday.” (The gun Ethan Crumbley used was to be his Christmas gift). Meanwhile what more could Rep. Massie wish from Santa? “Bring more ammo.” 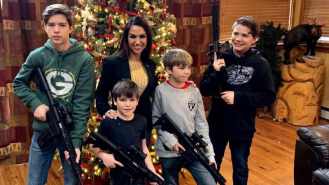 Not to be outdone, Rep. Lauren Boebert shared a photo of her children wielding semi automatic rifles in front of their Christmas tree, the latest gun-themed holiday photo released in the wake of a deadly high school shooting. “The Boeberts have your six, @RepThomasMassie!” Boebert wrote, adding that there was “no spare ammo.”

Looking more like an advertisement for What [gun] Would Jesus Shoot, the presence of Jesus gets lost among the presents of guns and ammo.

I get it: it’s a “free” country and they have a Second Amendment right to bear arms. But… really?

For more see Christina Wyman’s “A Christmas card with guns?“

When You have a Hammer…

If Jesus was still in the grave, He’d surely be rolling in it. But thank God – Jesus rose from the dead – victorious over our violence that put Him there; and thank God – Jesus came as the Prince of Peace and not as a god of war; and thank God that the mystery of Jesus’ love inexorably seeps through the crevices of our violent cultures over and against all who would distort Him, including me.

I’ve written in previous posts that a militaristic worldview is self-perpetuating, for when you have a hammer everything begins to look like a nail.

This Christmas, seek the One who is Peace, for when you find Him, you will find yourself in a different time zone and postal code from the violent Narnia of ever-winter and never-Christmas.

I leave you with David Rovics‘ 2004 sobering song:

11 thoughts on “WWJB this Christmas?”