America's largest cemeteries, For want of remembering, Hart Island, How will we remember?, Images of our Time, Loneliness, Mass graves in Mariupol and Bucha, Remembering the unclaimed dead, The loneliness of dying alone, Unclaimed people

Workers bury bodies in a trench on Hart Island on April 9, 2020 in the Bronx borough of New York City. (John Minchillo/The Associated Press)

Two years ago this week, I posted the photo above in “Images of Our Time.” There is something silently aching in this image of the numerous unclaimed dead lined up and efficiently buried in this massive unmarked grave. Unknown to me then was the larger story of Hart island.

The following excerpt is from an article titled, “He Buried The Unclaimed Dead On A New York Island. He Wants Others To Remember Them.”

“More than 1 million people are buried on New York City’s Hart Island, making it one of the country’s largest cemeteries. The city has used a potter’s field there for more than 150 years to bury the remains of unidentified or unclaimed people and those whose families can’t pay burial costs.

Until recently, inmates from the Rikers Island jail complex were responsible for carrying out the burials. Casimiro “Cas” Torres was one such prisoner tasked with the work.”

Torres, now 53 and long out of prison, arrived at Hart Island in the 1980s as a teenager after a series of run-ins with the law.

“If Torres ever hit a breaking point, he said, it was during the grim moments when he had to bury babies who were unclaimed. ‘It’s not something you should be seeing,’ he said.

On the island, the city has overseen the burials of homeless people, stillborn babies and victims of the AIDS epidemic. At the time, the cemetery was closed off to the public, so no loved ones could memorialize the dead. But, following a lawsuit and lobbying by advocates, NYC’s Department of Correction — which was then in charge of the burials — began providing regular, monthly visits to Hart Island in 2015.

When New York City became an epicenter of the coronavirus pandemic, a soaring death toll led to a dramatic increase in the number of burials on the island. It’s unknown how many COVID-19 victims are buried there.

In the spring of 2020, the city stopped using incarcerated people to bury the dead on Hart Island.” 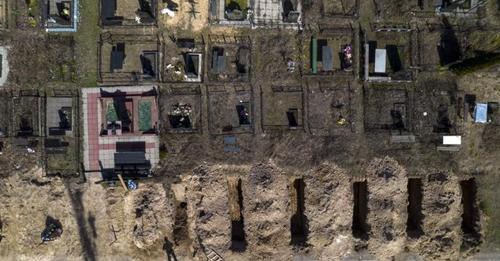 Ordinary Ukrainians have had to dig mass graves for their many civilian dead in Mariupol. Unspeakable crimes followed by indescribable indignity: people buried in a dirt trench, without family care or sacred remembering, and perhaps missing and forgotten.

An approximately 13.7-metre-long trench can be seen in the south-western section of the area near the church.(Reuters: Maxar Technologies)

The discovery of shallow mass graves of civilians killed and left behind in Bucha from which Russian forces have retreated has aroused bewilderment.

But life goes on and need remains. Ivan Rusyn, President of Ukrainian Evangelical Theological Seminary (UETS), continues to coordinate aid from a safe house in Kyiv. “But riding his bicycle into Russian-controlled Bucha to deliver medicine to a neighbour, he became an eyewitness to the atrocities” (Jayson Casper with CT).

It is an understatement to say that it is difficult to see the images of these slaughtered innocents because most people wonder, “What can we do to stop it?”

Russell Moore writes, “While the Ukrainians have shown grit and valor beyond what anyone could have predicted, by all accounts there is still a long slog ahead. The war crimes will continue.”

How will we Remember?

And how will we remember this period in our lives? How will we evaluate what we did and didn’t do to make things better for those suffering around us, or far from us?

And who are the people we’ve lost over the course of this pandemic?

And how will we remember?

4 thoughts on “For Want of Remembering”