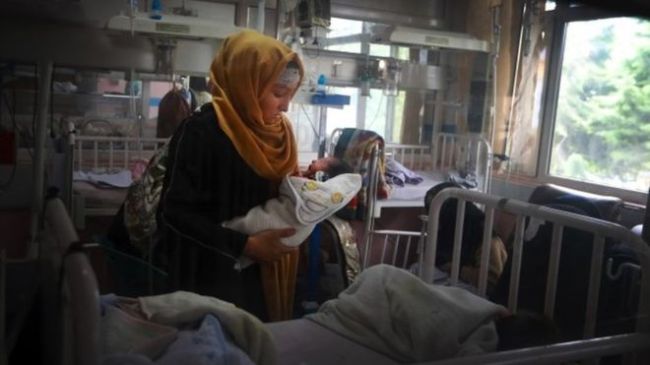 Gunmen killed 24 people in the attack, including at least 11 mothers. BBC/EPA Image

Days after we celebrated Mother’s Day, on Tuesday May 12 at about 10:00 a.m. Afghan time, three gunmen walked straight past a number of other wards, all closer to the entrance of Kabul’s Dasht-e-Barchi hospital, and made straight for the maternity unit. (Source: BBC: Afghan maternity ward attackers ‘came to kill the mothers’).

Today is the first I read of it on the BBC. I sit in bewildered silence. Who thinks of doing this? What kind of person thinks this is consistent with any internal ethic? What is hoped to be accomplished?

The cold-blooded murders of 24 women, children and babies at a hospital in the Afghan capital were horrific enough, but the intentional, methodical, calculated targeting of new mothers is unspeakable.

What I saw in the maternity demonstrates it was a systematic shooting of the mothers,” Frederic Bonnot, Head of Programmes for Médicins Sans Frontières (MSF) in Afghanistan, said. “They went through the rooms in the maternity, shooting women in their beds. It was methodical.”

They came to kill the mothers.

“It’s shocking,” said Bonnot. “We know this area has suffered attacks in the past, but no one could believe they would attack a maternity unit.

“This country is sadly used to seeing horrific events,” he added. “But what happened Tuesday is beyond words.”

It was reported that the gun battle between the militants and Afghan security forces went on for four hours. The gunmen were all killed. In all, about 100 people were killed in violence around Afghanistan on Tuesday (NY Times).

Imagine giving Birth at such a time:

There was a baby being born in the hospital during the same time as the attack. Hearing the gunshots around them and knowing a possible assault was imminent, the midwife & mother sheltered and gave birth while trying not to make a sound.

“We helped her with our bare hands, we had nothing else in the room except some toilet paper and our scarves,” the midwife said.

“When the baby was born, we cut the umbilical cord using our hands. We used our headscarves to wrap the baby and the mother.”

Not Sure what to say

I just knew that this story shouldn’t be missed in the quagmire of news regularly reported by western media and entertainment updates.

I just thought we should take a moment to grieve, pray, and wonder at our part of making peace in this troubled world.